PARKROYAL Penang Resort – a tropical paradise to luxuriate in

For two consecutive years, my daughter has requested the same birthday gift – a weekend at PARKROYAL Penang Resort. The Resort has been one of her favourite places to kick back and lose herself in a tropical paradise.

Living in Penang, we are indeed fortunate that we can just take a 35-minute drive from home to Batu Ferringhi sans the arduous plane and taxi rides (e.g., my cousin from Toronto took some whooping 23 hours to reach Penang).

Centuries-old rain trees rise up above us. Majestic and lush, the foliage reaches for the ground, like falling rain suspended in the form of vibrant green leaves. The natural beauty accentuates the grandeur that surrounded us at Shangri-La’s Rasa Sayang Resort and Spa, Penang. 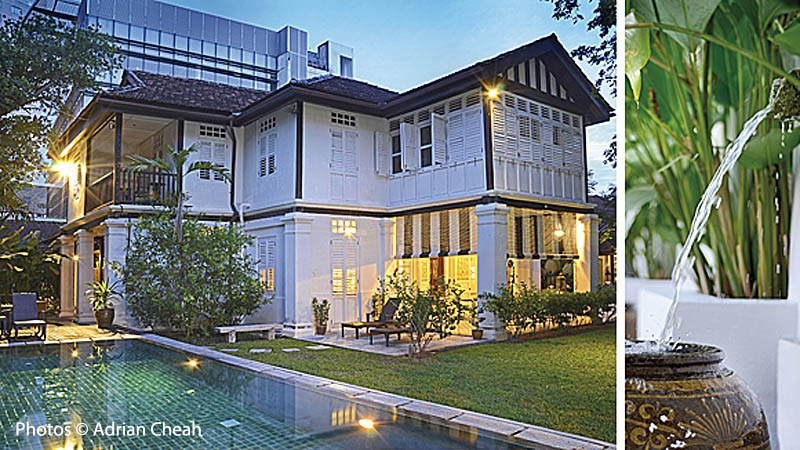 Clove Hall is a privately-owned Edwardian Anglo-Malay bungalow set in an oasis of tropical gardens. It is just ten minutes by trishaw from the vibrant living culture of the world heritage enclave of George Town. To venture further, rent a motorcycle or hire a taxi and explore Penang's exotic sights, sounds and tastes.

On 13 August 2017, Ahmad Nawab shared his musical journey in a dialogue session with Gareth Richards at the Penang House of Music. In a career spanning six decades, Ahmad has composed more than 2,000 songs and almost 70 singers from all over the region have recorded his songs. Many have become standards. Besides ‘Bintang Malam’ (subsequently recorded by Zaharah Agus and Uji Rashid), other songs include ‘Kau Kunci Cintaku Dalam Hatimu’, ‘Setulus Hati Mu’, ‘Sabar Menanti’, ‘Tiada Maaf Bagi Mu’, ‘Antara Matamu dan Mataku’ and ‘Wajah Kesayanganmu’.

Pastoral charms and rustic women – the batik art of Teng

An appreciation of a local legend

One does not run the risk of an overstatement when describing Chuah Thean Teng as the pioneer of batik painting. He is, after all, recognized internationally as the master of an exquisite and delicate art - one which requires skill, draftness, patience and meticulousness. In the fickle, fidgety and evolving world of art, his oeuvre has carved a permanent niche in the rare pantheon reserved for timeless and sublime works of beauty. 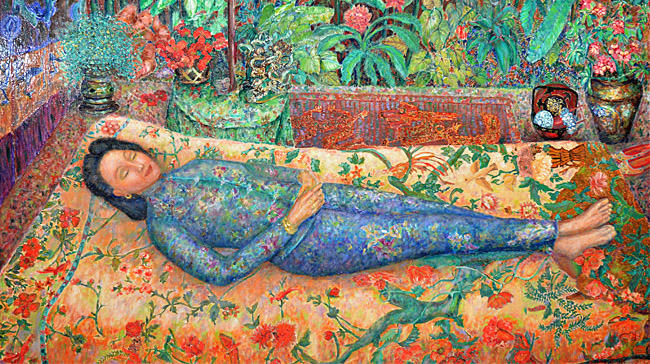 Sylvia Lee Goh embarked on a journey of discovery of identity and self-worth. It was a long road, but with a lot of encouragement and moral support.

In the mid-eighties Sylvia was a member of the Arts and Craft Guild, holding a committee member position for two years. This Guild was under the umbrella of the American Association.

In 1986, Ahmad Khalid Yusoff, the president of the Persatuan Perlukis Malaysia invited Sylvia to become a member. Today, she is a life member of this Association.

The Digital Age and today’s globalised world have been a boon for the spread of Popular Culture. Popular culture – Western or American, is slowly but surely seeping into our way of life. Predictably, even Asian youths are dressing and gesturing like their hip hop or boy band idols from MTV. Even the way we speak is being MTV-nised and you will find certain youths who are more at home going “Yo, dude” or "Whassup” than greet you in their native tongues.

P. Ramlee: Where lies the heart of a star

Every genius has his roots. Each marvel springs from a source.

In 1925, a young sailor from Lho' Seumawe in Acheh by the name of Teuku Nyak Puteh settled in Penang to marry a quiet lass from Butterworth, Che Mah Hussein.

As the modest couple began a new life in a village, it is unlikely they could in their wildest dreams have imagined that they would have a son who would someday become a legend.

Penang is not just about its hot weather, tasty food, and wonderful heritage buildings. A great part of the delight of living here is the friendliness of the everyday encounters with ordinary Penangites. Neither obsequious nor snooty, most possess a genuine warmth and an interest in people that sets them apart. Join us as we celebrate a few of the human jewels of Penang.