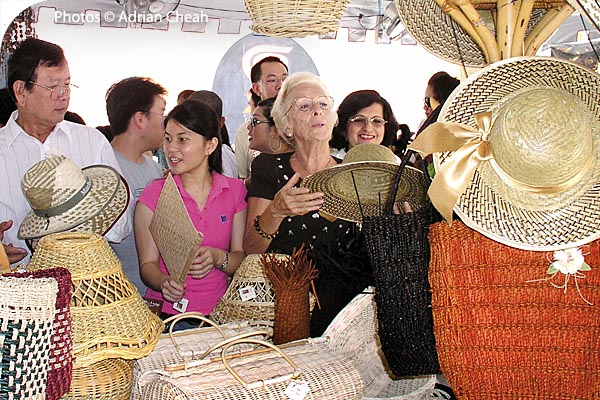 To call the Little Penang Street Market a microcosm of Penang and Malaysian cultures is no empty boast. Its multi-faceted makeup has little parallels elsewhere. But it is also an incomplete description. The Street Market isn't merely another weekend shopping spot. Penang already has plenty of those, both traditional and modern, elaborate and simple, for every day of the week. In fact, Penang is such a shopper's paradise that some have been 'moved' to say, in local language "tengok pun dah kenyang" (a Malay phrase meaning that one is sated merely by looking).

Having said that, what exactly is an apt description? According to James Lochhead, a committee member, the concept behind the Market is a three-tiered one, comprising an avenue for trade, an atmosphere for encouraging entrepreneurship and social work. Over 70 percent of Little Penang Street Market's vendors, James says, are individual artisans or home-based entrepreneurs. For example, some of the traders at the Market, like Saodah (a traditional herbalist) and Jonathan (a silver craftsman) are truly unique and their skills cannot be found elsewhere. Here, their 'natural' talents get maximum exposure, via locals and tourists. Local charities have also not been left out.

From dream to reality

When the project was first thought up by a disparate group of Penang aficionados - from experts in culture and heritage down to the residents, the aim was nothing more than to highlight a part of George Town that was special to them and to all Penangites. Upper Penang Road, the locale of the market, is where old and new meet, on the one part the Old Colonial Quarter (largely unspoilt) and on the other a bustling and urbane corporate city. In a way, one is reminded of the famous saying by Rudyard Kipling in The Ballad of East & West. While the old and new meet in everyday Penang, the two are by and large two individual halves of the betel nut.

Drawing plans soon became reality, and a dream was brought to technicolour life, literally! Since its launch on 30th July 2006, Little Penang Street Market has been focusing on, and highlighting local arts, crafts and culture by providing design and marketing support to local artists, artisans and cultural entrepreneurs. It is held on the last Sunday of every month, from 10am to 5pm. It is located on Farquhar Street and Light Street near the E&O and City Bayview hotels. You can't miss it.

So what is in store at the Little Penang Street Market? The experience is akin to stepping into the bazaars and street markets depicted in Burton's fictional Arabian Nights and Scheherazade. Here's a top-spinner from the East Coast, over there are Nyonya kebayas in every shade of the rainbow, in a little stall are piping hot chicken pies all the way from Penang Hill and within earshot are a performing troupe.

Visitors from overseas may, for example, draw parallels with the street market in Carouge in France (just a few minutes drive from Geneva) or the Stanley and Temple Street Night markets in Hong Kong. Here is where you find an assortment of items: precious and collectible discards, Chinese goods, mobile phones, clothes and watches.

Here in the Penang version of the street market, the organisers have cleverly zeroed in on all the favourite weekend past-times of Penangites - food, shopping, entertainment and jalan-jalan (walkabouts) converging them under one locale. There is so much to see, buy, eat or simply admire, but let us now, like Mussorgsky admiring the works of Hartmann, take our time and promenade around the market, lest we miss anything.

Crafts: When St. Laurent transferred works of art onto haute couture, he showed the world that the fun part of art was when you could wear it like a fashion accessory! The inspiration here draws from homegrown ideas, using local materials. Watch how bags are woven from palm fronds, quilts and bags made patchwork style, cloth and basket weaving, bags and seashell fashion accessories.

The perennial favourite footwear of old and young-beaded shoes and slippers-are not only made, but you can watch how they are painstakingly put together. And what goes better with beaded shoes than another timeless classic, the Nyonya kebaya dress. Made from high quality cottons and silks, the kebaya blouson accentuates the gentle curves of a woman's body but never restricts movement. So many colours and cuts to choose from, and everyone of them stitched to perfection!

If you, like many others, cringe at the thought of bumping into another person wearing the same outfit as yourself, check out the hand-painted t-shirts by the talented Joelle Saint-Arnoult. Not only will she give you the fun and opportunity to literally wear a work of art, but you are guaranteed of exclusivity!

Check out Jonathan Yun, a graduate in jewellery design from Lasalle-SIA College of the Arts, Singapore and winner of numerous international jewellery design competitions. Jonathan's designs take inspiration from nature using precious metals, gem stones and objects from nature, such as butterfly wings.

In the world of haute couture, handmade almost always comes with an exorbitant price tag. Not so Parida Mokhsin's handbags, described by some, with tongue firmly in cheek, as 'Parida' (as in Prada!). Rich contrasts of batiks, brocade, tartans, sequins, beads, and buttons are Parida's signature strokes. Each series of bags have evocative names based on the fabrics used. Having left her corporate career to stay at home for health and family reasons, Little Penang Street Market provides exposure and focus for her creativity.

Less showy but just as unique in its own inimitable way is the humble clog. Different from Dutch klompen but made from the same material-wood. Local clogs (or terompaks in Malay) were, once upon a time, commonly found in bathrooms and kitchens. Made entirely of wood often painted crimson, they were actually very hardy. These days wooden clogs have been superseded by the more Western styles of casual footwear, and the craft is facing the threat of extinction, even if novel attempts have been made to turn clogs into fashion statements.

Another local favourite is batik, a stylised art-form that is just at home on formal and casual shirts, sarongs, t-shirts, slippers, scarves and framed art. See how dyes and waxes are used to create the instantly recognisable batik pattern.

Quality home décor items like candles, frames, baskets, bedspreads and fancy glassworks are also available, quite often with the local touch. They make perfect gifts and are really popular with tourists. You'd be hard pressed to find such things in upscale malls or airport shops!

Not everything in the Little Penang Market is local however. Mixed in with the kerongsang (brooches), leaf origami grasshoppers, nyonya belts, beaded bags, ceramics and seashells are modern silver jewellery and Swarovski crystal. One could say that there's something for everyone.

Our very own 'Body Shop': Where in the world have you heard of banana cider? Together with neem oil, turmeric facial scrubs and bath herbs, these are some of herbalist Saodiah Wahidin's natural range, which some users swear by. For years, Saodah has been collecting natural remedies from local communities and manages a small farm with her husband in Kuala Kangsar. With assistance from the Street Market, Saodah worked with two young graphic designers to create a new logo and labels, giving her products a charming rustic look that is so en vogue these days. Move over, Body Shop!

Antiques and collectibles: Penang's rich history has endowed it with a diverse range of collectibles, both European and local varieties. Hence it is not surprising that Penang has one of the highest numbers of antique dealers. This facet of Penang's history will also be a regular feature.

Arts: Get your portrait painted by Rashid, and while you're at it, see how Chinese calligraphy and vignettes are executed.

Entertainment: The Eurasians of Penang and Malacca have always been a musical lot. The contribution of the Eurasians to the development of local music is immeasurable. Names like Alfonso Soliano and Jimmy Boyle will remain in the collective conscience of all local music lovers. Today, Eurasians are still in the forefront of modern local entertainment. It comes as no surprise then, to find them as part of the Little Penang Market's attractions, together with other performers. Some of the performing bands include The Rozells, Lenny Quah, Chantalle Westwood, Paku, Ray & Adrienne and Norleena Salim and Rozz.

Passing troupes and artistes provide an insight into traditional and modern past-times found outside of Penang. Comedienne Joannne Kam and her brand of self-effacing humour was here. A coming attraction are gasing/top-spinners from Kelantan. Traditional tops are completely unlike the toy tops kids used to play with, consisting of a wooden body and a nail. The former are carefully fashioned from iron and wood. The measurements have to very precise, as the correct torque will generate a flywheel effect, keeping the 'gasing' spinning for a longer time.

Environment awareness: Recycling is something that is very beneficial and yet most people choose to be blissfully ignorant about its importance.

Did you know that wood pulp can be used to make papyrus scrolls with a personal touch (yours that is). Leaves can be woven into realistic looking grasshoppers. Penang's foremost recycling experts Don Theseira and Mylene Ooi were on hand to give you tips on successful recycling.

Food, glorious food: Those familiar with Penang's most famous affectation – the love of good food. Trust a Penangite's sense of smell, which will always lead to the best eating spots in town.and village! Needless to say, food plays a very major role in the activities of the Little Penang Market, and gastronomics' taste buds will be well taken care of!

Charities and social work: If there's one aspect of the Little Penang Market that others should emulate, it's their commitment to social causes. The people behind the Market are trying very hard to promote organisations like the St. Nicholas Home for the Blind through blind masseurs. Handicrafts such as basketry, woodwork, and woven rattan made by the inmates of the Penang Prisons Department and Stepping Stone Support Centre For Community Living are also marketed. It's a win-win arrangement quite similar to that of Anita Roddick's "trade not aid" Body Shop concept. Likewise, the Little Penang Market aims to assist as many charities as they can via trade, not handouts.

Children's Corner: Care has also gone into making sure that the little ones have not been left out of the fun. Some of the activities that have been organised include dances, t-shirt paintings, educational games, origami and a heritage 'treasure hunt' with Mr. Love Lane.

Strangers we may be to one another on this little island, but the monthly Little Penang Market aims to bring people together from all over nonetheless, to partake and imbibe in culture and tradition. East and West, yesterday and today, young and old, there's something for everyone at one of the liveliest and exciting events in Malaysia.

© Written by Raja Abdul Razak in 2006
© Photographed by Adrian Cheah