Jalur Gemilang – the stripes of glory

Behind the simple and slightly derivative design, the Malaysian flag has, since its creation, served as a silent testament to the country's heritage and cultural mix, and upholding cherished values like freedom and justice.

The Malaysian flag (now known as Jalur Gemilang) was officially adopted on 16 September 1963.

The present design features a yellow crescent moon and a 14-pointed star against a blue rectangle on the upper left corner. The entire face is adorned by 14 horizontal red and white stripes of equal height and length representing the equal status in the Federation of the member states and the Federal government.

The moon and star represent Islam, the main religion of the country. The yellow colour of the moon and star represents the Yang di Pertuan Agung (or paramount ruler) who is looked upon by Malaysian Muslims as the the leader of the faith. The 14 points of the star serve the same purpose as the 14 horizontal stripes. The blue background symbolizes unity for all Malaysians.

A very early design of the country's flag, in 1905, featured four different coloured bands representing the four states namely Perak, Selangor, Negri Sembilan, and Pahang. In the centre, an oval in white with a running tiger.

As more states joined, the Malay Federation was founded on 1 February 1948. Two years later, a new flag was introduced.

How the present design came about

To commemorate the formation of the Federation of Malaya, a flag designing competition was held by the Federal Legislative Assembly. A total of 373 entries were submitted and three made it to the finals.

The first design featured a pair of crossed kris's (a Malay weapon) surrounded by a halo of 11 five-pointed stars.

The second design was similar to the first.

It was the third design however, featuring the now familiar stripes and yellow crescent moon and star, that cinched the prize and assured the designer, Mohd b. Hamzah, an architect from Johore, of a permanent place in Malaysian history.

After a few amendments to the original design (for example the changing of the stripes from blue and white to red and white), the flag received the approval of the Council of Rulers and then King George, in 1950, with the following declaration: "That in the opinion of this Council the Flag of the Federation of Malaya should be as follows:- Eleven horizontal stripes alternately red and white in colour, the uppermost stripe being red, having a blue quarter with a cresent and eleven pointed star in yellow superimposed, the standard size of the flag to be six feet by three feet."

It was with much pomp and ceremony that the first public fluttering of the flag took place on 26 May 1950 at the istana of the Sultan of Selangor, attended by rulers of the Malay States and British officials. 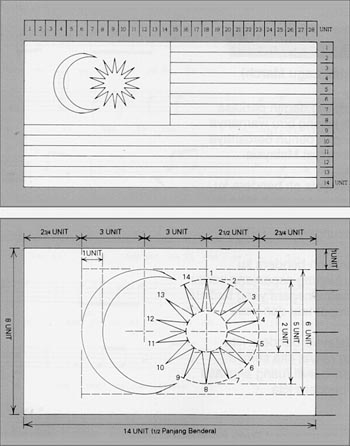 The inclusion of Sabah, Sarawak dan Singapore into the Federation added three more stripes to the flag, making a total of 14. This new incarnation was given a public launch on 16 September 1963. Although Singapore broke away from Malaysia two years later, the number of stripes have remained the same.

Finally in 1997 (after 40 years of independence), the Malaysian flag was bestowed the affectionate title of Jalur Gemilang or Stripes of Glory.