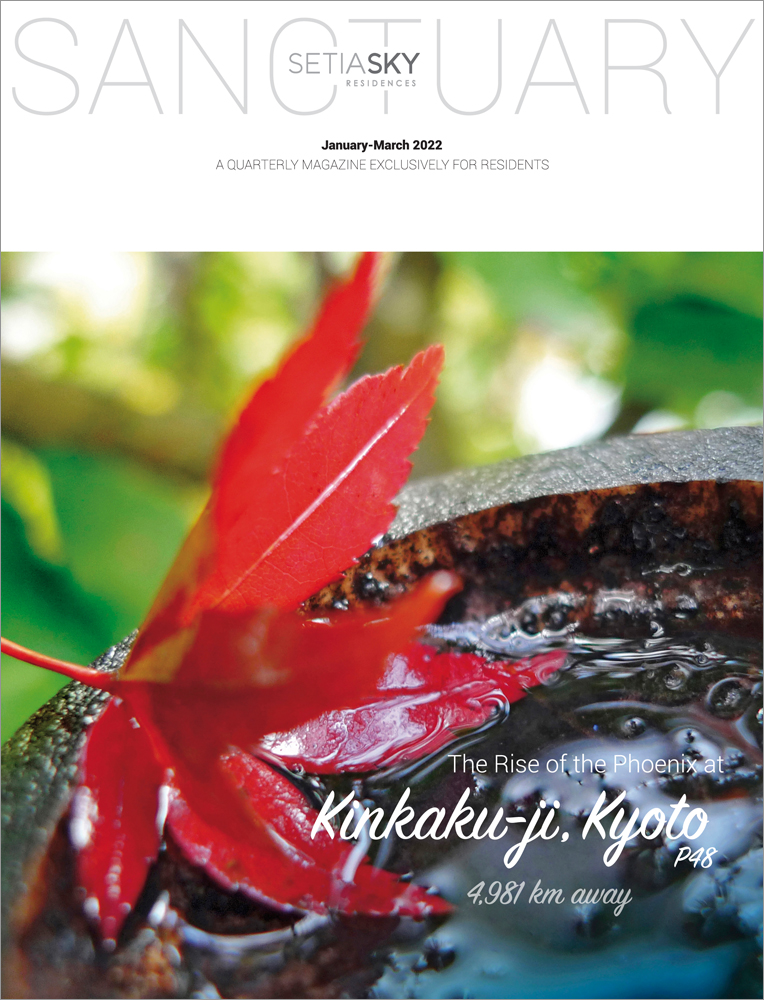 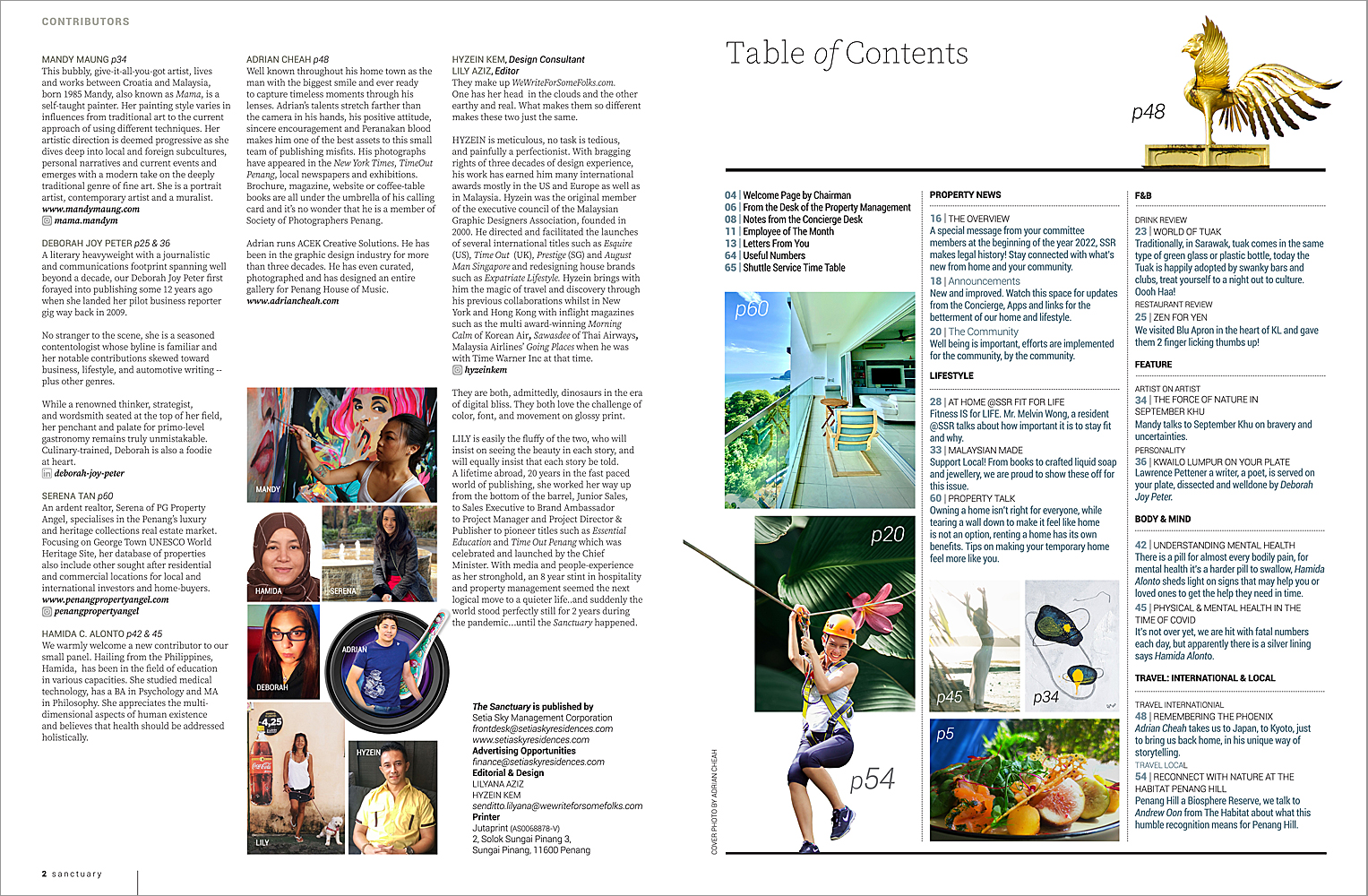 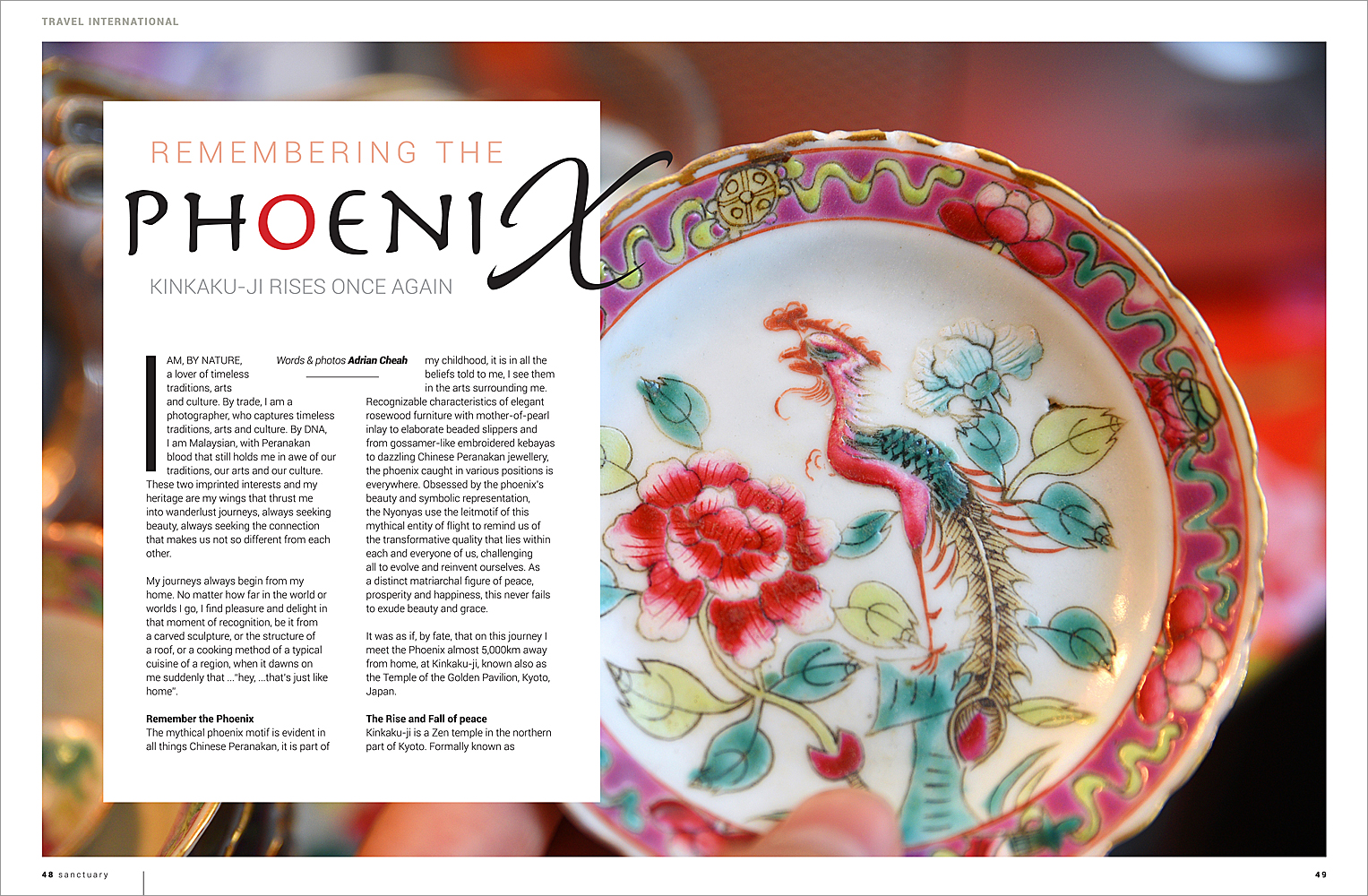 My journeys always begin from my home. No matter how far in the world or worlds I go, I find pleasure and delight in that moment of recognition, be it from a carved sculpture, or the structure of a roof, or a cooking method of a typical cuisine of a region, when it dawns on me suddenly that ...“hey, ...that's just like home”.

The mythical phoenix motif is evident in all things Chinese Peranakan, it is part of my childhood, it is in all the beliefs told to me, I see them in the arts surrounding me. Recognizable characteristics of elegant rosewood furniture with mother-of-pearl inlay to elaborate beaded slippers and from gossamer-like embroidered kebayas to dazzling Chinese Peranakan jewellery, the phoenix caught in various positions is everywhere. Obsessed by the phoenix's beauty and symbolic representation, the Nyonyas use the leitmotif of this mythical entity of flight to remind us of the transformative quality that lies within each and everyone of us, challenging all to evolve and reinvent ourselves. As a distinct matriarchal figure of peace, prosperity and happiness, this never fails to exude beauty and grace.

It was as if, by fate, that on this journey I meet the Phoenix almost 5,000km away from home, at Kinkaku-ji, known also as the Temple of the Golden Pavilion, Kyoto, Japan.

The Rise and Fall of Peace

Kinkaku-ji is a Zen temple in the northern part of Kyoto. Formally Rokuonji, the temple was the retirement villa of the shogun Ashikaga Yoshimitsu. According to his will, it became a Zen temple of the Rinzai sect after his death circa 1400s. The promise of peace and calm of retirement was not to last as the calmness and beauty of the land was abruptly interrupted by a series of violent events.

Ravaged by the Onin War during the 1467–1477, horrifically engulfed in the fires of 1565, and then set ablaze in the wee hours of the morning of the 2nd of July 1950 by a 22-year-old fanatic acolyte, Hayashi Yoken.

Nothing comes close to describing the darkest hours as below, by Yukio Mishima, from his 1956 novel Temple of the Golden Pavilion;

"When people concentrate on the idea of beauty, they are, without realising it, confronted with the darkest thoughts that exist in this world. That, I suppose, is how human beings are made." 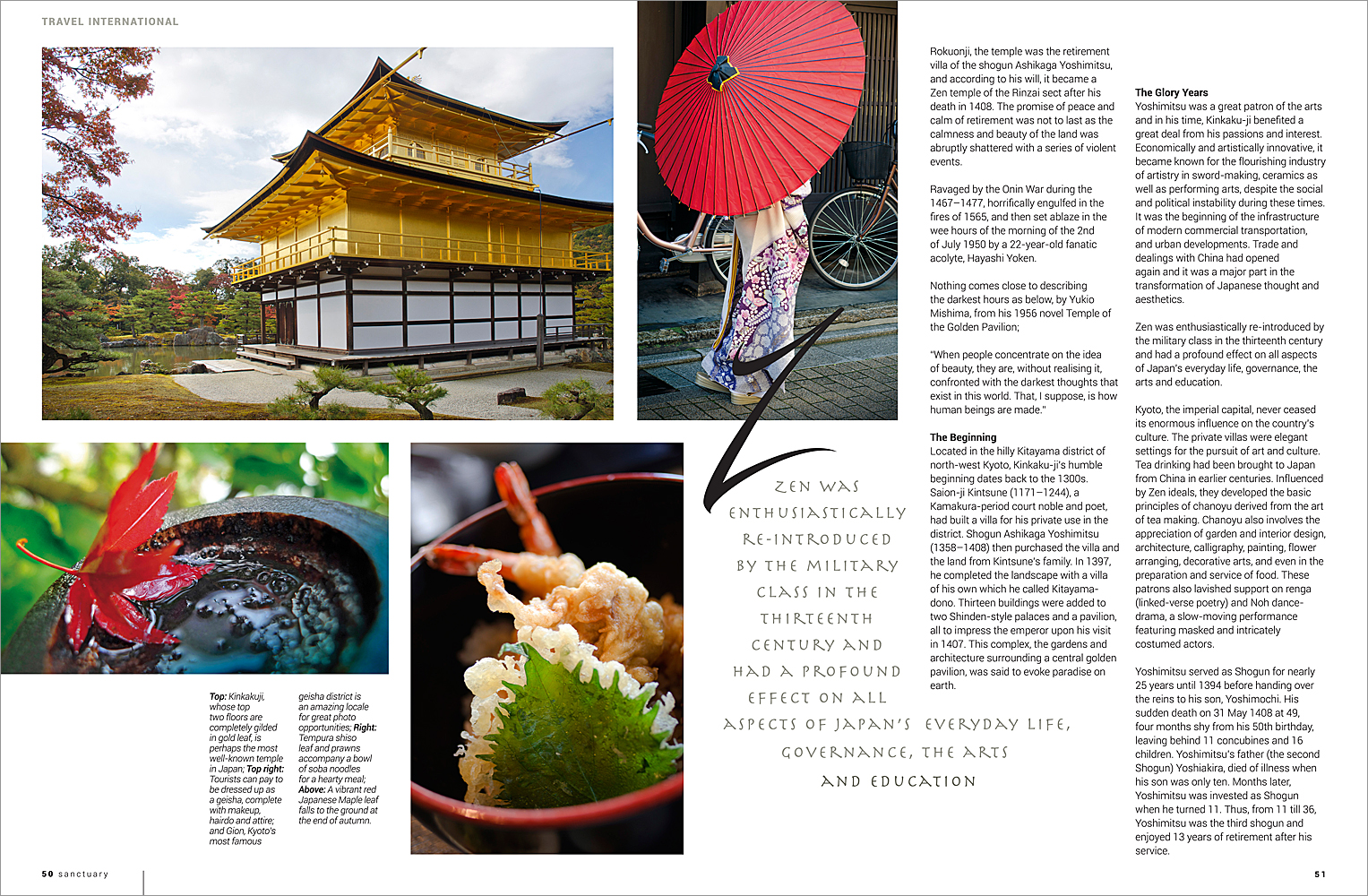 Located in the hilly Kitayama district of north-west Kyoto, Kinkaku-ji's humble beginning dates back to the 1300s. Saion-ji Kintsune (1171–1244), a Kamakura-period court noble and poet, had built a villa for his private use in the district. Shogun Ashikaga Yoshimitsu (1358–1408) then purchased the villa and the land from Kintsune's family. In 1397, he completed the landscape with a villa of his own which he called Kitayama-dono. Thirteen buildings were added to two Shinden-style palaces and a pavilion, all to impress the emperor upon his visit in 1407. This complex, the gardens and architecture surrounding a central golden pavilion, was said to evoke paradise on earth.

Yoshimitsu was a great patron of the arts and in his time, Kinkaku-ji benefited a great deal from his passions and interest. Economically and artistically innovative, it became known for the flourishing industry of artistry in sword-making, ceramics as well as performing arts, despite the social and political instability during these times. It was the beginning of the infrastructure of modern commercial transportation, and urban developments. Trade and dealings with China had opened again and it was a major part in the transformation of Japanese thought and aesthetics.

Zen was enthusiastically re-introduced by the military class in the thirteenth century and had a profound effect on all aspects of Japan’s everyday life, governance, the arts and education.

Kyoto, the imperial capital, never ceased its enormous influence on the country's culture. The private villas were elegant settings for the pursuit of art and culture. Tea drinking had been brought to Japan from China in earlier centuries. Influenced by Zen ideals, they developed the basic principles of chanoyu derived from the art of tea making. Chanoyu also involves the appreciation of garden and interior design, architecture, calligraphy, painting, flower arranging, decorative arts, and even in the preparation and service of food. These patrons also lavished support on renga (linked-verse poetry) and Noh dance-drama, a slow-moving performance featuring masked and intricately costumed actors.

Yoshimitsu served as Shogun for nearly 25 years until 1394 before handing over the reins to his son, Yoshimochi. His sudden death on 31 May 1408 at 49, four months shy from his 50th birthday, leaving behind 11 concubines and 16 children. Yoshimitsu’s father (the second Shogun) Yoshiakira, died of illness when his son was only ten. Months later, Yoshimitsu was invested as Shogun when he turned 11. Thus, from 11 till 36, Yoshimitsu was the third shogun and enjoyed 13 years of retirement after his service. 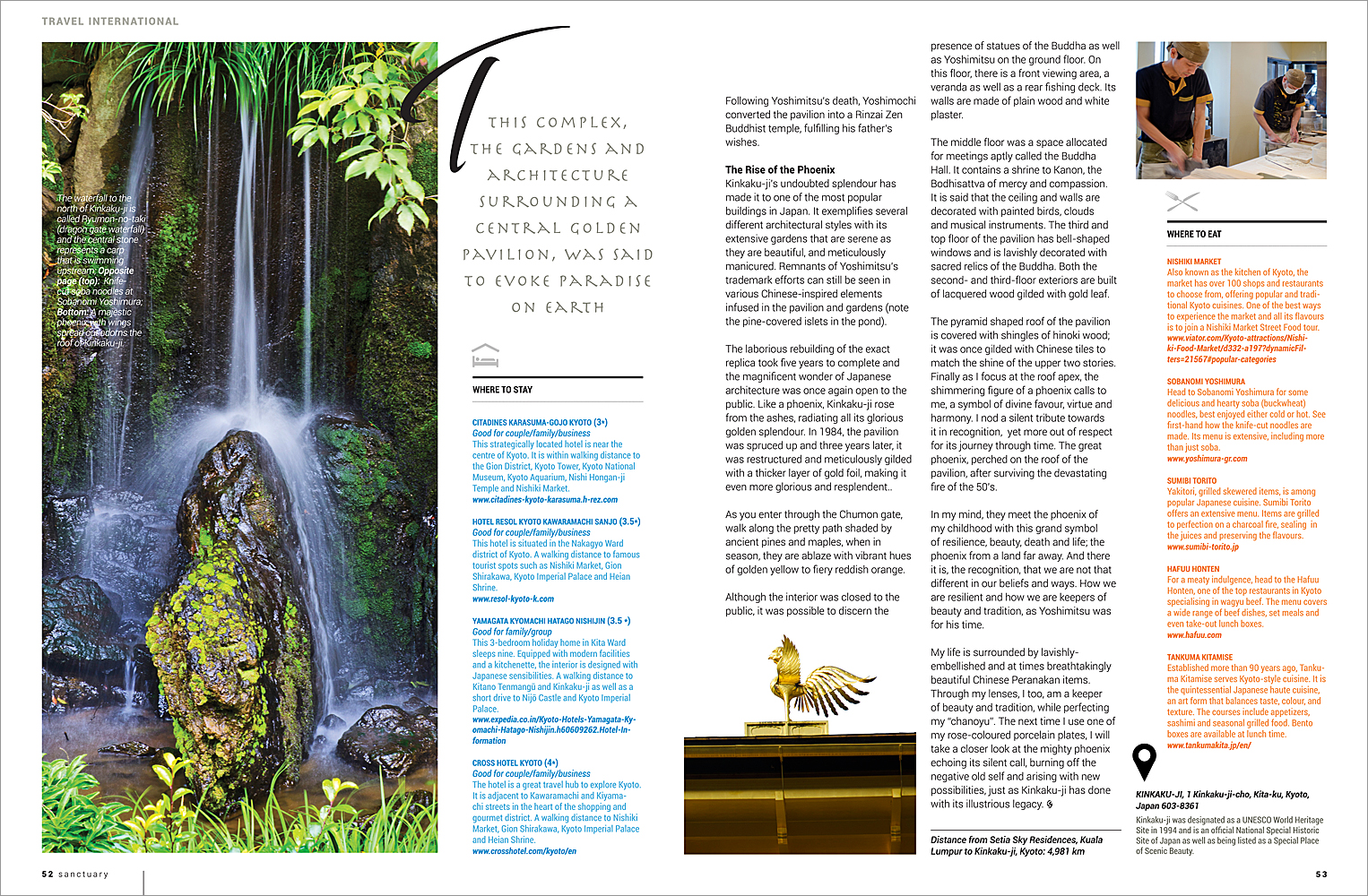 The Rise of the Phoenix

Kinkaku-ji's undoubted splendour has made it to one of the most popular buildings in Japan. It exemplifies several different architectural styles with its extensive gardens that are as serene as they are beautiful, and meticulously manicured. Remnants of Yoshimitsu’s trademark efforts can still be seen in various Chinese-inspired elements infused in the pavilion and gardens (note the pine-covered islets in the pond).

The laborious rebuilding of the exact replica took five years to complete and the magnificent wonder of Japanese architecture was once again open to the public. Like a phoenix, Kinkaku-ji rose from the ashes, radiating all its glorious golden splendour. In 1984, the pavilion was spruced up and three years later, it was restructured and meticulously gilded with a thicker layer of gold foil, making it even more glorious and resplendent.

As you enter through the Chumon gate, walk along the pretty path shaded by ancient pines and maples, when in season, they are ablaze with vibrant hues of golden yellow to fiery reddish orange.

Although the interior was closed to the public, it was possible to discern the presence of statues of the Buddha as well as Yoshimitsu on the ground floor. On this floor, there is a front viewing area, a veranda as well as a rear fishing deck. Its walls are made of plain wood and white plaster.

The middle floor was a space allocated for meetings aptly called the Buddha Hall. It contains a shrine to Kanon, the Bodhisattva of mercy and compassion. It is said that the ceiling and walls are decorated with painted birds, clouds and musical instruments. The third and top floor of the pavilion has bell-shaped windows and is lavishly decorated with sacred relics of the Buddha. Both the second- and third-floor exteriors are built of lacquered wood gilded with gold leaf.

The pyramid shaped roof of the pavilion is covered with shingles of hinoki wood; it was once gilded with Chinese tiles to match the shine of the upper two stories. Finally as I focus at the roof apex, the shimmering figure of a phoenix calls to me, a symbol of divine favour, virtue and harmony. I nod a silent tribute towards it in recognition, yet more out of respect for its journey through time. The great phoenix, perched on the roof of the pavilion, after surviving the devastating fire of the 50’s.

In my mind, they meet the phoenix of my childhood with this grand symbol of resilience, beauty, death and life; the phoenix from a land far away. And there it is, the recognition, that we are not that different in our beliefs and ways. How we are resilient and how we are keepers of beauty and tradition, as Yoshimitsu was for his time.

My life is surrounded by lavishly-embellished and at times breathtakingly beautiful Chinese Peranakan items. Through my lenses, I too, am a keeper of beauty and tradition, while perfecting my “chanoyu”. The next time I use one of my rose-coloured porcelain plates, I will take a closer look at the mighty phoenix echoing its silent call, burning off the negative old self and arising with new possibilities, just as Kinkaku-ji has done with its illustrious legacy.

Kinkaku-ji was designated as a UNESCO World Heritage Site in 1994 and is an official National Special Historic Site of Japan as well as being listed as a Special Place of Scenic Beauty.

This strategically located hotel is near the centre of Kyoto. It is within walking distance to the Gion District, Kyoto Tower, Kyoto National Museum, Kyoto Aquarium, Nishi Hongan-ji Temple and Nishiki Market.

This hotel is situated in the Nakagyo Ward district of Kyoto. A walking distance to famous tourist spots such as Nishiki Market, Gion Shirakawa, Kyoto Imperial Palace and Heian Shrine.

This 3-bedroom holiday home in Kita Ward sleeps nine. Equipped with modern facilities and a kitchenette, the interior is designed with Japanese sensibilities. A walking distance to Kitano Tenmangū and Kinkaku-ji as well as a short drive to Nijō Castle and Kyoto Imperial Palace.

The hotel is a great travel hub to explore Kyoto. It is adjacent to Kawaramachi and Kiyamachi streets in the heart of the shopping and gourmet district. A walking distance to Nishiki Market, Gion Shirakawa, Kyoto Imperial Palace and Heian Shrine.

Nishiki Market
Also known as the kitchen of Kyoto, the market has over 100 shops and restaurants to choose from, offering popular and traditional Kyoto cuisines. One of the best ways to experience the market and all its flavours is to join a Nishiki Market Street Food tour.

Sobanomi Yoshimura
Head to Sobanomi Yoshimura for some delicious and hearty soba (buckwheat) noodles, best enjoyed either cold or hot. See first-hand how the knife-cut noodles are made. Its menu is extensive, including more than just soba.

Sumibi Torito
Yakitori, grilled skewered items, is among popular Japanese cuisine. Sumibi Torito offers an extensive menu. Items are grilled to perfection on a charcoal fire, sealing in the juices and preserving the flavours.

Hafuu Honten
For a meaty indulgence, head to the Hafuu Honten, one of the top restaurants in Kyoto specialising in wagyu beef. The menu covers a wide range of beef dishes, set meals and even take-out lunch boxes.

Well known throughout his home town as the man with the biggest smile and ever ready to capture timeless moments through his lenses. Adrian’s talents stretch farther than the camera in his hands, his positive attitude, sincere encouragement and Peranakan blood makes him one of the best assets to this small team of publishing misfits. His photographs have appeared in the New York Times, TimeOut Penang, local newspapers and exhibitions. Brochure, magazine, website or coffee-table books are all under the umbrella of his calling card and it's no wonder that he is a member of Society of Photographers Penang.

Adrian runs ACEK Creative Solutions. He has been in the graphic design industry for more than three decades. He has even curated, photographed and has designed an entire gallery for Penang House of Music.