My understanding of All Saints' Day

Can you name five saints that you have heard of, even if you are not a Catholic? The first name that would come to mind is St. Anne, the grandmother of Jesus. The famous church in Bukit Mertajam is dedicated in her honour. Of course standing next to Mother Mary, the mother of Jesus, is St. Joseph.

Statues of St. Anne with child Mary at the Minor Basilica of St. Anne in Bukit Mertajam, Penang.

If you are familiar with the story of Jesus, you would know 11 other names, those of his apostles. These 11 except Judas Iscariot were made saints by the Catholic Church. These include Peter, Andrew, James (the son of Alphaeus), John, Philip, Bartholomew, Matthew, Thomas, James (the son of Zebedee), Simon and Judas (son of James).

If you have visited beautiful churches around the world like those in Rome or Italy, you would come across statues of some saints. Moreover, if you have friends with Christian names, the chances are that these could be the names of saints.

Left: The statue of St. Joseph at the Minor Basilica of St. Anne in Bukit Mertajam, Penang.
Right: A stained glass panel of St. Joseph at Church of the Immaculate Conception in Pulau Tikus, Penang.

Before we look at the celebration of All Saints' Day, let us study the definition of the word "saint". According to the Oxford Dictionary, the word "saint" is a noun listed as "a person that the Christian Church recognises as being very holy, because of the way they have lived or died".

The word “saint” must have derived from the Latin word "sanctus", meaning “holy".

Beautiful stained glass panels of St. Francis Xavier (left) and St. Aloysius Gonzaga (right) adorn the Church of the Holy Name of Jesus in Balik Pulau, Penang. Made in Bruges (Belgium), these panels were installed during the extension works of the church completed in 1894.

A gilded statue of St. Jean-Baptiste de La Salle proudly stands in front of St. Xavier's Institution at Farquhar Street, Penang. He is patron saint for teachers of youth. I am proud to have been schooled here.

How does the Catholic church make someone a saint?

Here are the five stages:

Margaret was born blind and deformed; not able to bear her "disgraceful" appearance, her rich noble parents locked her up in a cell next to their castle church. The family chaplain was her only friend and educator. She spent her early childhood in solitude, devoting herself to prayer. Her parents then abandoned her in Città di Castello following a failed attempt to seek a miraculous healing at a Franciscan shrine. She led a stray life and later found refuge with some nuns from the small community of Santa Margherita. However, the nuns, unable to compare with her unrivalled asceticism, banished her.

Margaret was finally taken in by a deeply pious married couple, Venturino and Grigia. She devoted herself to the formation and Christian education for children, cared for the poor and wretched of the city. On 13 April 1320, the 33-year old Margaret passed away after her illness worsened.

After her death, many miracles occurred in confirmation of her valiant sanctity. On 9 June 1558, when the bishop authorised the transfer of her body, those involved were surprised to find it perfectly preserved. On 19 October 1609, the Church officially recognised Margaret’s sanctity, pronouncing her a "blessed", designating 13 April as her feast day.

Today, dressed in a Dominican habit, the incorrupt St. Margaret lies in a glass coffin under the high altar of the Church of St. Domenico at Citta-di-Castello in Italy. Although the colouring of the body has darkened slightly and her dry skin appears hardened, its preservation is in remarkable condition.

St. Patrick has to be one of Ireland's most popular saints, celebrated annually all over the world on 17 March. In 2020, Penang held its 20th St. Patrick's ball as well as a street parade. It was not a religious affair but a celebration of all things Irish as Ireland's national day also falls on the same day.

The story of St. Margaret is among the many saints who have been canonised. St. Ulrich or Ulric, (born c. 890, Augsburg, Alemannia – died 4 July 973, Augsburg), bishop and patron saint of Augsburg, was the first person recorded to have been canonised by Pope John XV in 993. However, it was not until 1588 (595 years later) that the canonisation process was centralised in a formal process when Pope Sixtus V established the Congregation for the Causes of Saints. According to Encyclopaedia Britannica, there are more than 10,000 saints recognised by the Roman Catholic Church. 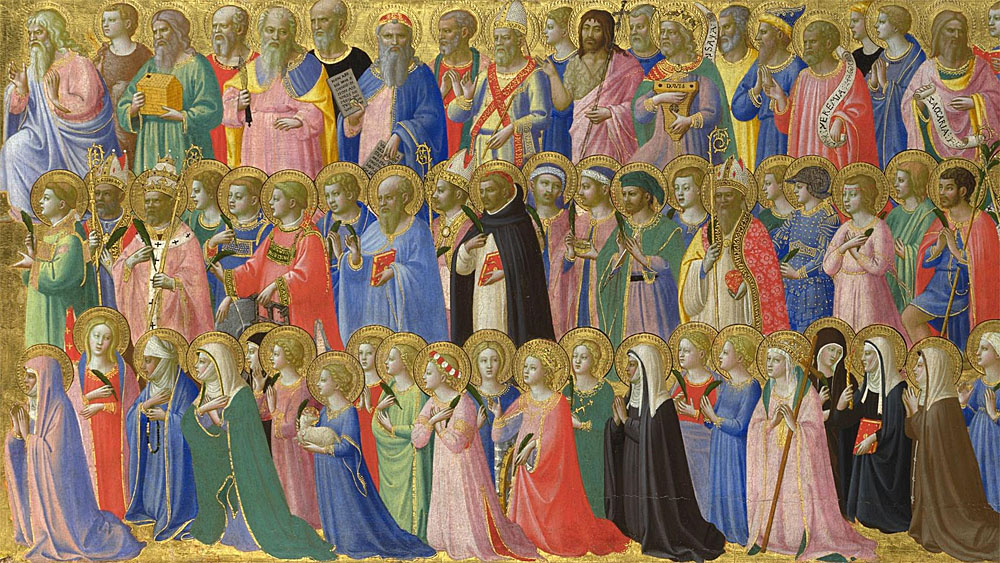 The Forerunners of Christ with Saints and Martyrs, probably painted by Fra Angelico. He was one of the principal painters of the Early Renaissance in Florence.

Now that we have delineated the definition of saints and how they were canonised, let us take a closer look at a solemn feasts – All Saints' Day. Every year on 1 November, Roman Catholics around the world observe the day of obligation which honours all saints.

Another explanation of Halloween ties its origins back to an ancient Celtic festival called Samhain. It was a religious festival to welcome in the harvest and usher in “the dark half of the year". The Celtic culture dating back 1200 BCE celebrated Samhain on 31 October. Celebrants believe that the barriers between the physical world and the spirit world break down during Samhain, thus the donning of ghostly costumes even until today.

Although we can trace the origins of Halloween (which to me should be called Samhain), we cannot trace those of All Saints’ Day with certainty. All Saints' Day was originally celebrated on 13 May (according to Encyclopedia Britannica). Pope Boniface IV formally started what would later be known as All Saints' Day on 13 May 609 AD when he consecrated the Pantheon in Rome as a church in honour of Mother Mary and all the martyrs. Later, Pope Gregory III (731-741 AD) shifted the date to 1 November when he dedicated a chapel in Rome's St. Peter's Basilica in honour of all saints.

Originally it was only a local celebration in Rome until Pope Gregory IV in 837 ordered the official observance of All Saints' Day to be extended to the entire Church.

Today, if I were to ask a child to draw a saint, most likely it would be a matchstick figure with a halo above the head, a recognisable iconic image from The Saint, a 1960s British mystery spy thriller television series.

How did the halo become a spiritual symbol hovering over the head of a saint? Peering back through the veils of time, the halo was present in Zoroastrian art dating back to 1500 BCE; further back to 2890 BCE, Ra, an ancient Egyptian god, was depicted with a round halo. In terms of art history, the sheer speed at which the halo migrated across cultures, makes it particularly noteworthy as a universal religious symbol of divinity. It has been depicted in sacred art of Ancient Greece, Ancient Rome, Hinduism, Buddhism and Christianity, among other religions. In the 21st century, the halo is a powerful reminder of humanity's shared cultural heritage.

To me, a saint seeks the truth and conquers himself, a real "mountain" climber of faith whose heart is broken by every little sorrow, yet is so strong that not even death can break it. A saint is not made by thoughts or words, but through action, always helping all around him. A saint should not be recognised depicted with a halo or reminisced after his passing. By the way, all those present, living around us are also saints, both you and I included – when we give a helping hand, lend an ear or touch the hearts of others with our deeds. All Saints' Day reminds me of my connectedness with humanity's heart.

I believe that we are all granted sainthood! Thus, on All Saints Day, think of and give thanks to all, especially to those whose lives have touched others. Let us find inspiration in all around us, alive or departed.