Angkor Wat Part 1: The sacred citadel of the god kings

The Khmers of Cambodia were unsurpassed builders, sculptors and decorators in stone, leaving us the majestic temples of Angkor, undeniably among humanity's greatest treasures.

In 1860, a French naturalist Henri Mouhot in his search for exotic insects stumbled upon the ruins of Angkor Wat. The royal temple-mausoleum of the god-king Suryavarman II had lain hidden under a serpentine embrace of creepers, trees and undergrowth for over four hundred years.

Mouhot recorded detailed observations of his visit and wrote evocatively about Angkor in his travel journals. Sadly in 1861, Mouhot then only 35 died of malarial fever, a year after his expedition to Angkor Wat. The journals and beautiful illustrations he drew were later incorporated into "Voyage dans les royaumes de Siam, de Cambodge, de Laos", published posthumously. 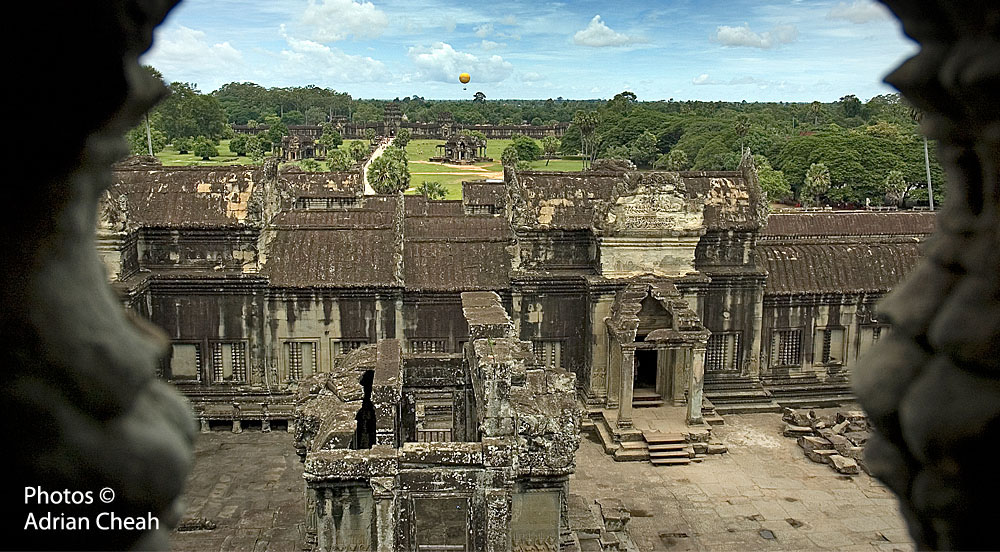 The location and existence of the entire series of Angkor sites have always been known to the Khmers. For almost a year (August 1296 – July 1297) Zhou Daguan, a Chinese diplomat, who remained at the court of King Indravarman III, wrote a detailed report on the daily way of life at Angkor. His portrayal is one of today's most important sources for understanding historical Angkor and the Khmer empire at its zenith. It was only much later in the 16th century that Angkor was visited by several westerners. However after Mouhot's journals and illustrations were published, they gained much attention in the Western world.

"Then, all at once, I was suddenly transported from barbarism to civilization, from profound darkness to light," Mouhot noted on his first sighting of Angkor Wat.

I share Mouhot's sentiments when I first laid eyes on Angkor Wat in late August 2010. The temple complex is an awe-inspiring architecture of imposing grandeur and at close quarters, imbued with fascinating decorative flourishes. 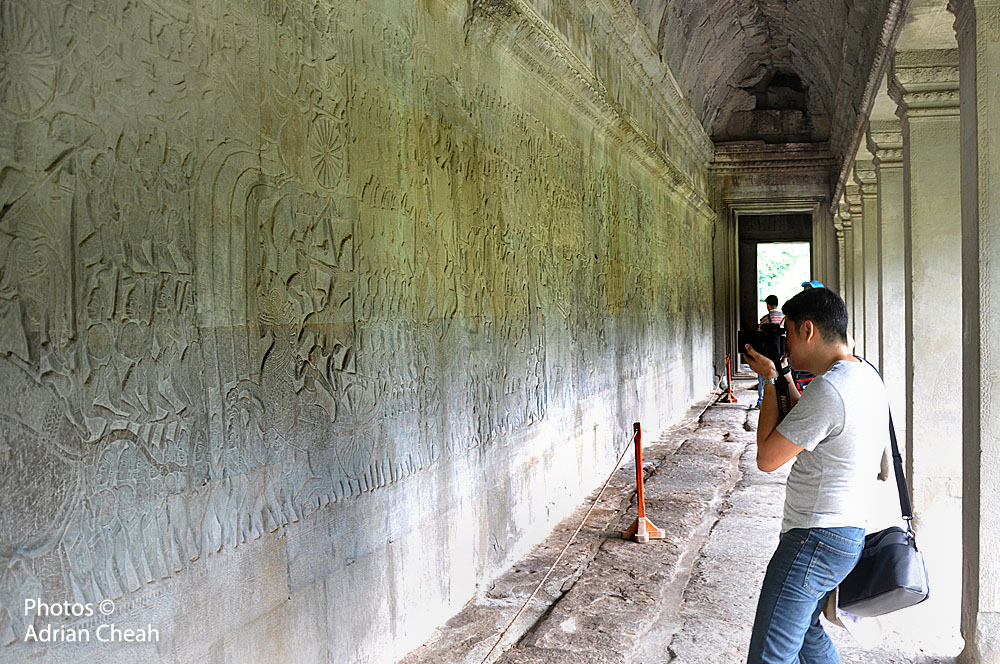 The astonishing and enduring architectural marvels of Angkor Wat were built under the rule of King Suryavarman II in the early 12th century. Breaking from the Shaiva tradition of previous kings, Angkor Wat was instead dedicated to Lord Vishnu, the Supreme Godhead in Vaishnavism. Carvings that portray King Suryavarman II as Lord Vishnu – where he is often shown reviewing his troops, addressing audiences and also performing various other functions – adorn the temple complex.

In its heyday, the endless corridors at Angkor Wat, carved with the longest bas-reliefs in the world would have been painted in various colours and gilded, thus shimmering brilliantly in gold as sunlight washes over them.

The southern section of the east corridor illustrates the Puranic literature of Samudra Manthana (Churning of the Ocean of Milk). This brilliantly executed corridor of carvings depicts devas (gods) and the asuras (demons or titans) working in unison to churn the primordial ocean, releasing Amrita, the elixir of immortality.

As the story goes, Mt Mandarachala (also known as Mount Meru) was used as a rod to churning the ocean and the giant seven-headed Naga King, Vasuki as the rope. The asuras held the head of Vasuki and the devas held its tail end and they pulled his body alternately, causing the mountain to rotate and the ocean to churn. When placed in the ocean, Mt Mandarachala began to sink, so Lord Vishnu incarnated into his second avatar as the tortoise Kurma, lending his shell to serve as the base and pivot of the mountain. The colossal tug of war continued for a millennium before the precious gifts of the ocean were obtained.

According to Angkorologist Eleanor Mannikka, the bas-relief has a practical function in marking the number of days between the winter and summer solstices. She connotes that the 91 asuras mark the 91 days between the winter solstice and spring equinox in March, while the 88 devas represent the 88 days to the summer solstice after the equinox period. She believes this is just one of the many hidden cosmological meanings encoded at Angkor Wat.

Thirty one years later, the fourth king after the reign of King Suryavarman II, King Jayavarman VII took control of the kingdom. He shifted the capital and made Angkor Thom the new centre of the Khmer empire. He fortified the city with a formidable 8 metre-high wall running the length of 12 kilometres, encircling the city with a 100 metre-wide moat.

Crossing the moat to each of the city’s five gates is a causeway, lined on either side by stone figures – 54 devas on one side and 54 asuras on the other – tugging on Vasuki. Together, they churn the Ocean of Milk represented by the moat below, 54 figures on each side, 108 figures per bridge, multiplied by five bridges, totalling the sum of 540.

According to writer and historian, Graham Hancock, through his mathematical and astronomical investigation, believes that these numbers are all related to the figures of precession.

In astronomy, precession refers to the slow, conical motion of the earth's axis of rotation. The Earth goes through one such complete precessional cycle in a period of approximately 26,000 years.

Standing at the exact centre of Angkor Thom is the Bayon Temple, the last state temple built in the Angkor complex. King Jayavarman VII began its construction in the late 12th or early 13th century. It was altered during the reign of King Jayavarman VIII and underwent further modifications under the Theravada Buddhist kings in later years.

To me, the most distinctive features of the Bayon Temple are the towering tranquil visages of Lord Brahma. On each of these 13-foot tall towers, his four smiling faces with eyes closed mysteriously, face four cardinal directions. Each head is adorned with an elaborate headdress, a necklace and a pair of earrings including a third eye, all synonymous with Lord Brahma.

Lord Brahma is the creator of the universe and all beings, as depicted in Hindu cosmology. The Vedas, the oldest and the holiest of Hindu scriptures, are attributed to him and thus, Lord Brahma is regarded as the father of Dharma.

However, some archaeologists argue that the faces are that of Lokeshvara, the Bodhisattva of compassion. Some believe that they resemble King Jayavarman VII as they bear uncanny resemblances to available statues of the king. It is possible that the faces are meant to depict King Jayavarman VII and the Lokeshvara simultaneously, allowing the king to take on the attributes of the Bodhisattva as well. 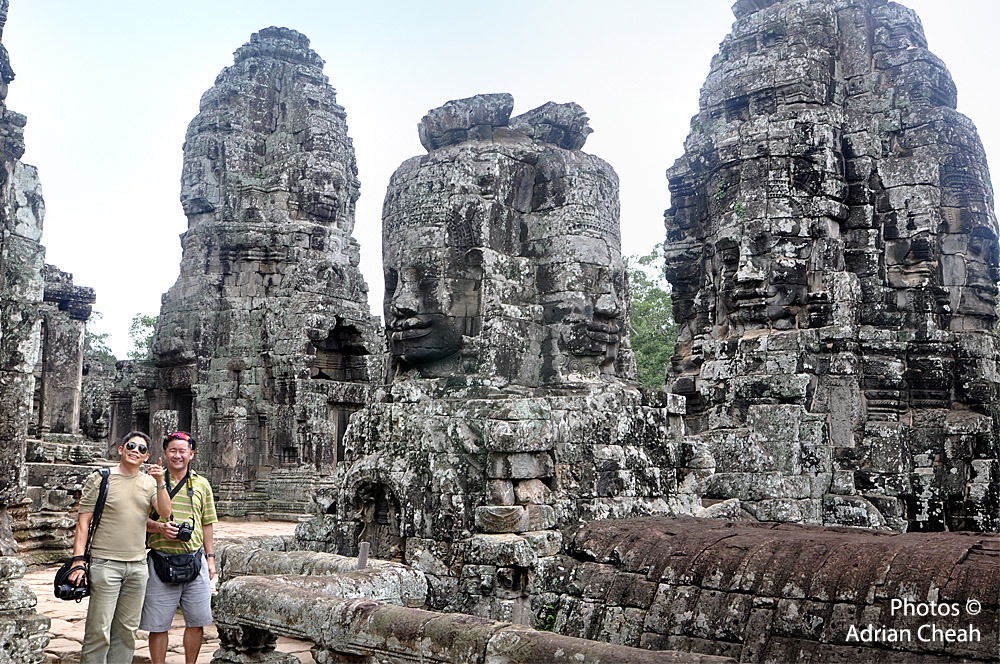 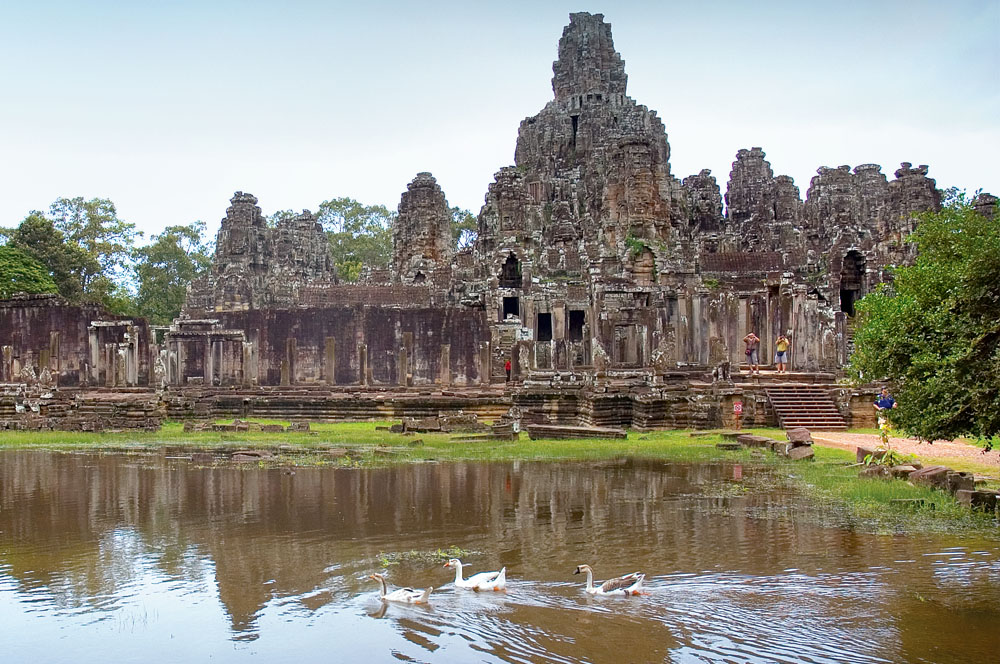 Although 37 stone towers now still stand, this number used to be 54 in its heyday. It is believed that they carry a total of 216 colossal faces.

Hancock believes that the number 54 has to be more than just a mere coincidence, just as there are 54 statues on each side of the five bridges leading to Angkor Thom. He stresses that the bridges are more than a structure lined with exotic statues to tell a tale, believing that they are a colossal 3-dimensional model of the procession as well.

We took our time to explore the enigmatic Bayon Temple. It is surrounded by two long walls bearing exquisite bas-reliefs depicting historical events and scenes from the everyday life of the Angkorian empire.