Lourdes, where miracles do happen

A serendipitous encounter in October 2015 took me to Lourdes in France where I was immersed nude in the water of the spring that St. Bernadette discovered on 25 February 1858, the symbol of purification. Boarding a plane from Penang, I knew nothing about St. Bernadette nor the holy pilgrimage Lourdes offered.

I was actually on a photography assignment to capture images for a lightning-induced experiment at Technopole Hélioparc in Pau, France. The laboratory testing was for Lightning Protection System's (LPS) EI 200 Lightning Air Terminal, the latest advanced electrically-isolated air terminal for lightning protection. LPS is a leading lightning protection manufacturing and consulting company in Malaysia. Based in Kuala Lumpur, it is managed by Ir. MH Mak and Ms. Michelle Martin.

Since Lourdes was only an hour's drive from Pau, Mak, Michelle and I decided to explore the pilgrimage site located near the Pyrenees mountains in France. Of course, that was after a run of successful and fruitful testing at Technopole Hélioparc.

Baptised as a Roman Catholic when I was a baby, I have always been fascinated by phenomena that border the realms of the unexplained – miracles. Am I expected to accept all that cannot be explained (yet) with a leap of faith? How can holy water do that or consecrated chrism (also called myrrh) cure? As I get older and being an artist as well as a photographer, I now look harder at things right before my eyes. It is best not to "look up" nor "down" but rather straight at them.

I find it rather ironic that the messenger of Our Lady at Lourdes, synonymous with healing, should be so heavily burdened by illness throughout her life. Born on 7 January 1844, Bernadette was the eldest in the close-knit Soubirous family of nine children. She did not go to school as she had to help her aunt Bernarde. From young, she suffered from health-related issues including asthma.

At 14, she had a series of sightings of a young woman believed to be the Virgin Mary (now known as Our Lady of Lourdes). The apparitions appeared eighteen separate times, occasionally giving her encouragement and most famously, pointing her to the source of the "healing" spring waters. Because of the apparitions, she was thrown into a media storm. Father Peyramale and mayor Lacade saw that it was necessary to protect Bernadette so they admitted her as “a sick poor person” to a hospice managed by the Sisters of Nevers in 1860. At 16, she started to read and write. On the day of her Profession, the bishop declared that her work would be “the work of prayer” which she remained faithful to. She lived in a nunnery for thirteen years, spending a large portion of her days ill in the infirmary and in prayer for the sick. When a fellow nun accused her of being lazy, Bernadette replied that it was her job to be ill. She was also struck by tuberculosis of the bones in her right knee as well as her lungs. On 16 April 1879, at only 35, she passed away.

The Church canonised her a saint on 8 December 1933, not for having been chosen for the apparitions but for the way in which she responded to that grace. Our Lady of Lourdes asked Bernadette to recite the Rosary, as she herself fingered the beads. This site has thus become a special school of prayer.

Bernadette reported that the apparitions at Lourdes asked for a chapel to be built at the Massabielle Grotto. Today, the grotto has become one of the most popular Christian pilgrimage sites in the world. It is also believed to be a place of miraculous healings credited to the spring water, receiving millions of visitors annually. The miraculous healings began in Bernadette’s lifetime – some were short-term recoveries, some outright hoaxes and some confirmed miracles, continuing till this very day. In 2018, the Catholic Church recognised the 70th Lourdes miracle during its 160th anniversary. With more than 200 million visitors over that time, the odds of a "medical miracle" at Lourdes is indeed a miracle in itself. 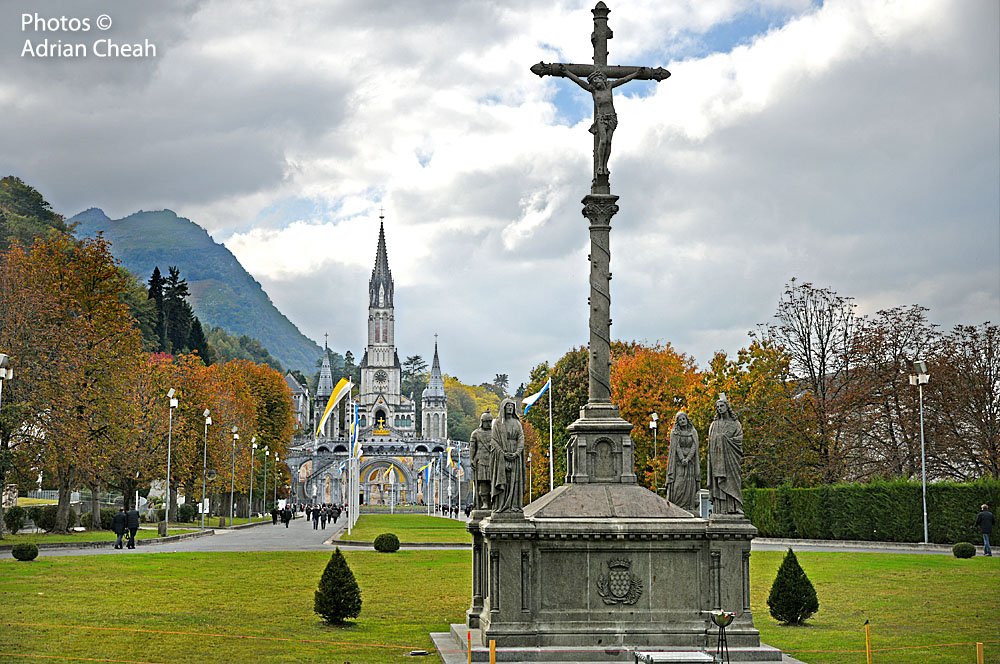 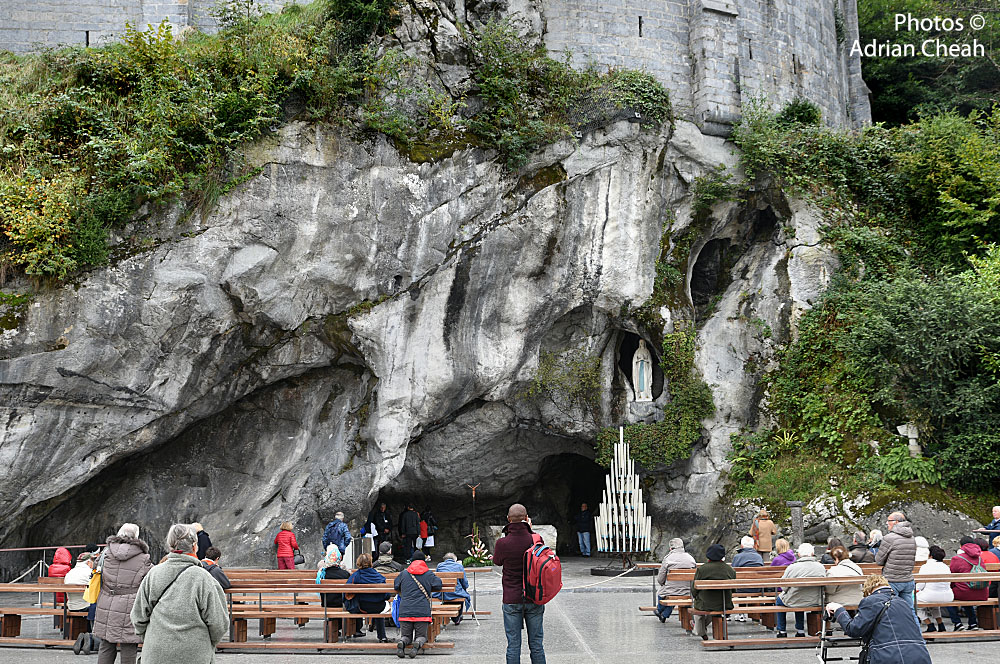 The Massabielle Grotto, where the apparitions occurred, is a crevice in a boulder (Massabielle) located next to the Gave de Pau river.

A Madonna in white carrara marble, sculpted by French sculptor Joseph-Hugues Fabisch in 1864, marks the exact spot of the apparitions. He sculpted the statue according to Bernadette's description of the Madonna.

At the back of the grotto, the sacred spring is still visible today, protected with a glass covering. The spring feeds the taps on the left of the grotto as well as the baths on the right.

The Crypt stands on the Rock of Massabielle, between the Basilica of the Immaculate Conception and the Basilica of the Rosary. Its intimate interior seats about 120 people and was the first sanctuary to be opened to the public in 1866. Above the entrance is a mosaic of Saint Pius X. The church also houses four chapels dedicated to the Sacred Heart of Jesus, Saint Joseph, Saint Peter and Saint John the Evangelist. 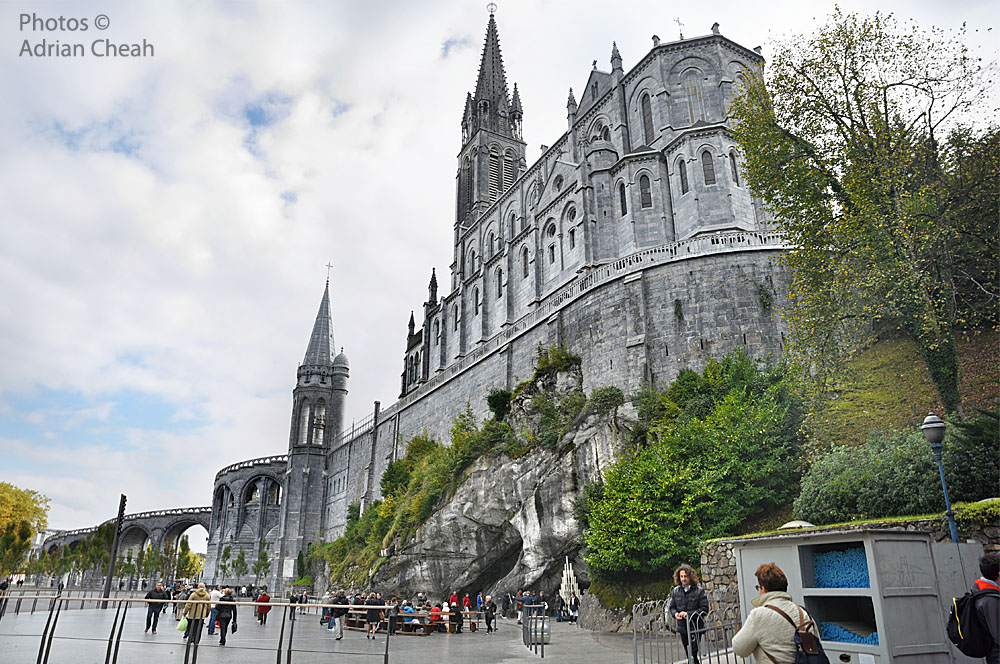 The Basilica of the Immaculate Conception (also known as the Upper Basilica), designed by French architect Hippolyte Durand has a typical thirteenth-century Ogival-styled architecture.

Consecrated in 1876, it was the second of the churches to be completed on the site. It is adorned with charming stained glass panels that represent the apparitions that Bernadette had.

What enthralled me most in this church were the monumental marble sculptures. The incredible details in every curve of the body, expressions in the faces and how the garments draped were carefully etched into masterpieces. 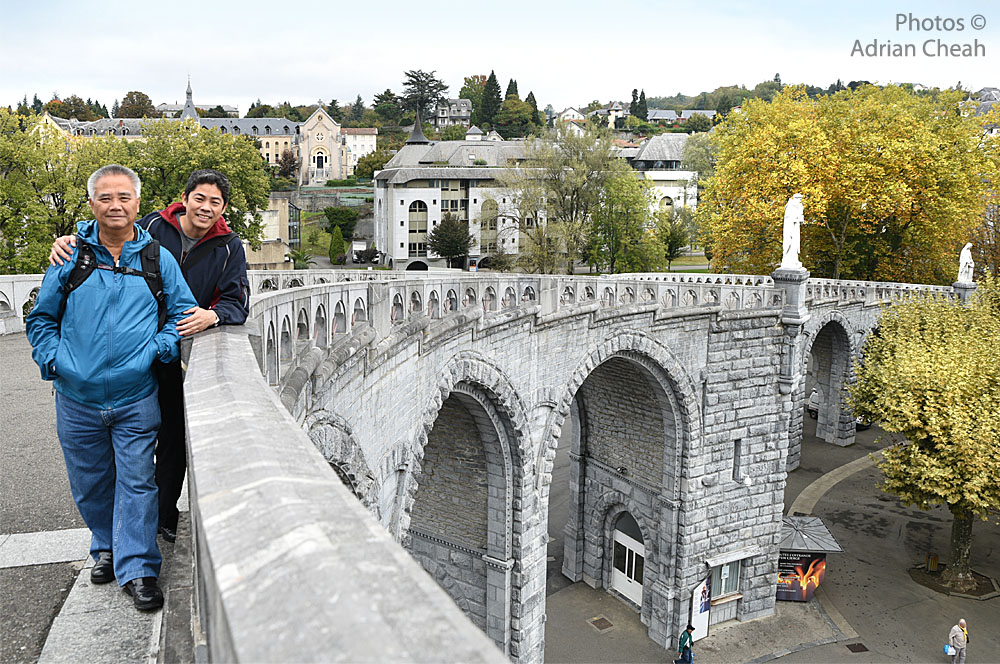 Walk down an elliptical ramp and head towards the Basilica of the Rosary. It was designed by French architect Léopold Amédée Hardy and was the third of the churches to be completed in the sanctuary. This opulent Byzantine-style basilica celebrated its first mass in 1899 and was consecrated two years later. 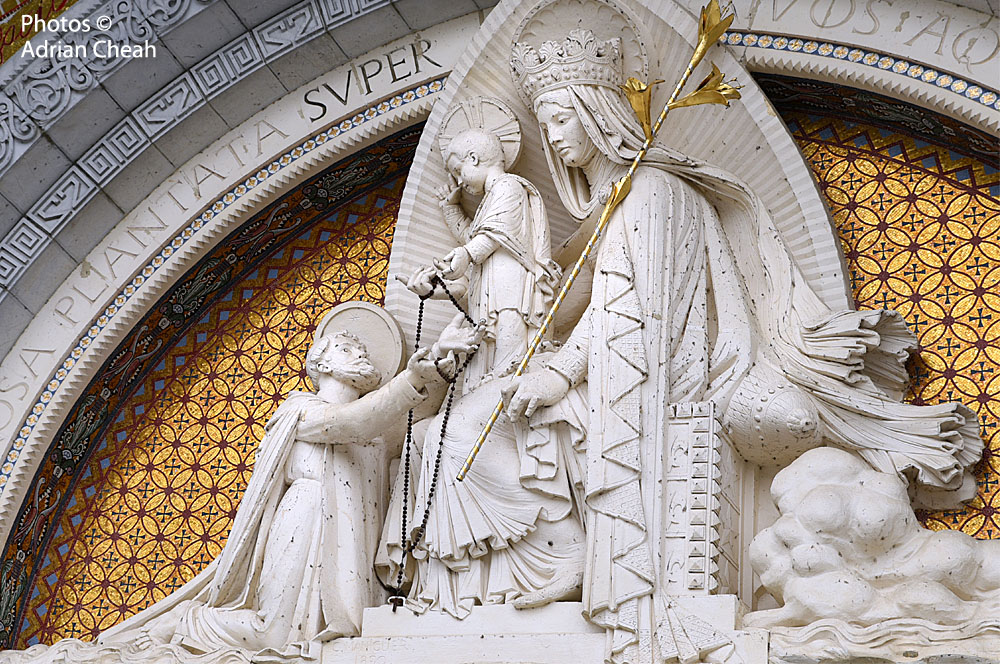 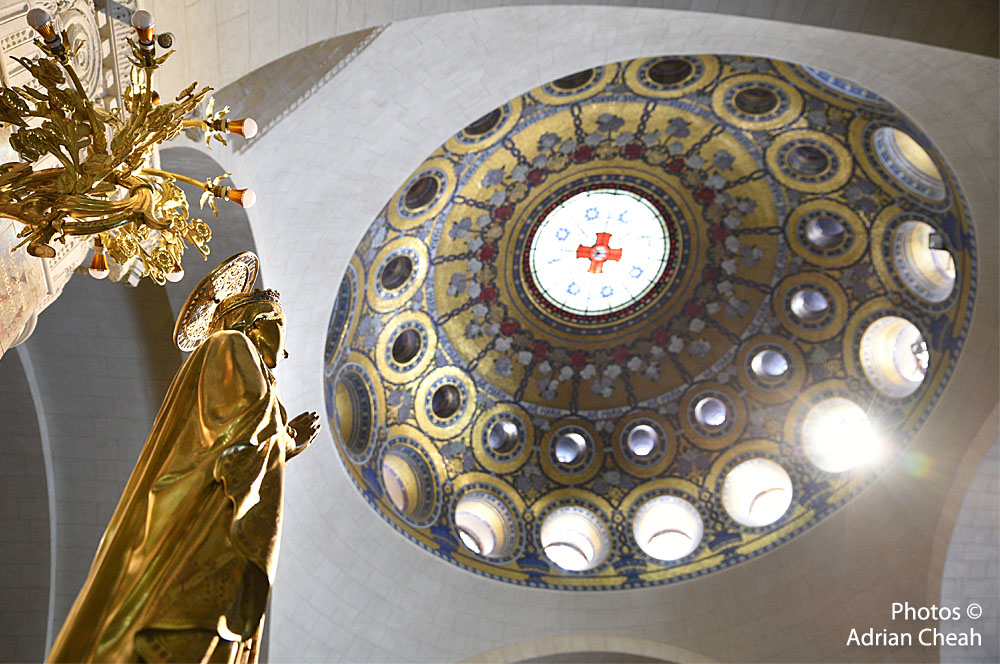 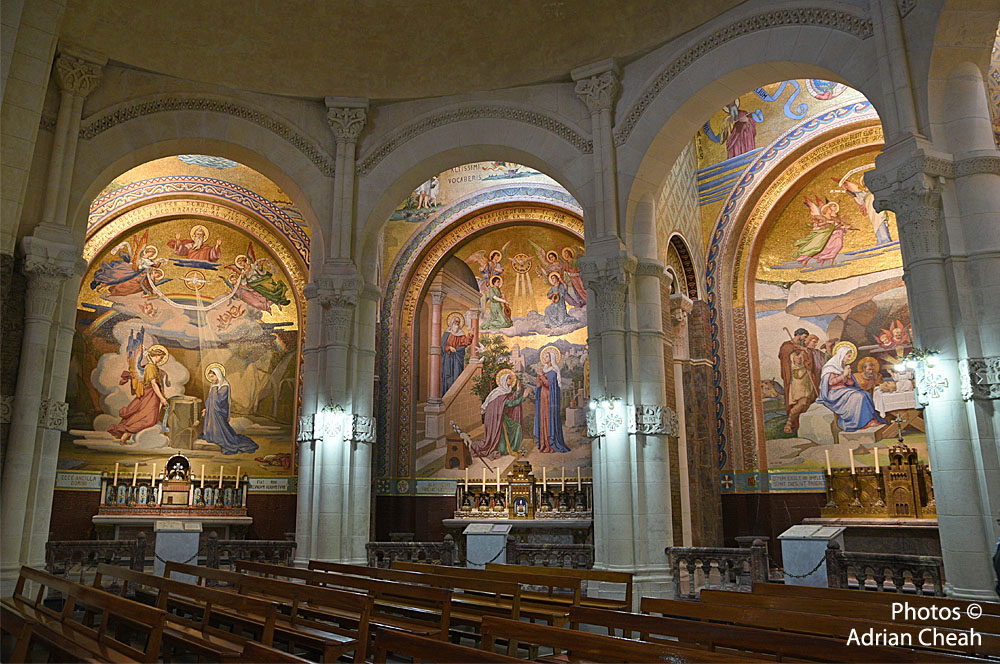 The interior is covered with spectacular Venetian mosaics depicting Mysteries of the Rosary. This basilica easily accommodates 1,500 worshippers. 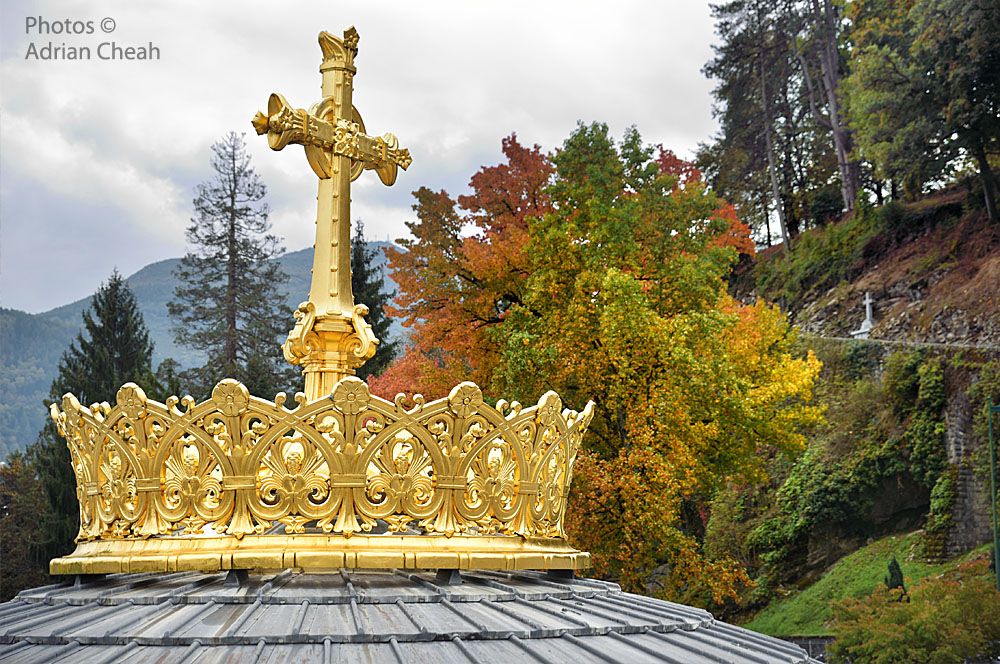 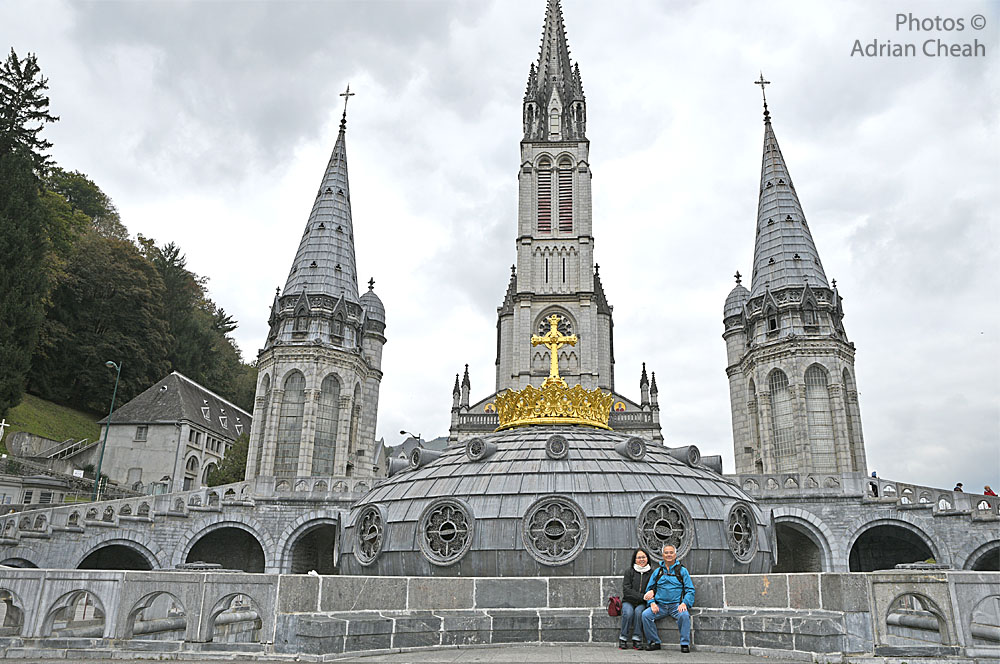 At the exterior of the basilica, above the dome is surmounted by a spectacular gilded crown with a cross, a gift from the people of Ireland donated in 1924.

After exploring the sanctuary, we decided to obtain some of Lourdes' "healing" spring water. I volunteered to do the needful and followed a long queue, armed with a plastic container. Among those in the queue travelling both near and far were the sick, some in wheel chairs and some even on stretchers.

Little did I realise as I inched close to the area where I thought I would finally fill my plastic container that I was actually queuing up for the bathing ritual. As I entered a room and eventually into a private area, I was asked to remove every article of clothing. Like a good Catholic school boy, although 47, I immediately obeyed. Then wrapped in a cloth, I was aided by two helpers, each holding my arm and as I held my breath, I was submerged in a marble tub of freezing water. Prior to that, I was also asked to pray for the healing I needed. Being fit and healthy, the only thing that came to my mind then was to be healed from a cluttered life and having inner peace. The whole process concluded as fast as it began. And as I was leaving with my still empty plastic container, I was informed that I could collect the spring water from the taps on the left of the grotto (minus three hours plus of queuing). Mak and Michelle was tickled pink with my debacle, as so was I.

A seven-hour drive north from Lourdes will take you to Nevers. A good friend of mine, Dr. John Wong, had the privilege to gaze upon the actual face of St. Bernadette at Saint Gildard Convent & Museum in Nevers. How is this possible, you might ask? Well, certain things should just be left unexplained.

Thirty years after Bernadette's death, her body was found to be in a remarkable state of preservation. Bernadette was exhumed in 1909 and again in 1919 and 1925. Called the “identification of the body", the exhumation comes at the end of the investigation into the cause for canonisation. It is a formal religious process where the body is identified, checked for signs of decay and relics collected.

The first examination of Bernadette began at 8:30 am on Wednesday, 22 September 1909. Witnesses testified there was no smell and the body was in pristine condition. Bernadette was washed by the Sisters and reclothed prior to being reburied. At the second exhumation ten years later, her skin was discoloured, probably from the handling during the 1909 exhumation. Once again, Dr. Talon and Dr. Comte were present and noted the lack of odour, some patches of mildew and drying of the skin. At the request of the Bishop of Nevers, the doctors detached and removed the rear section of the fifth and sixth right ribs, two patella bones as well as the muscle fragments right and left from the outside of the thighs as relics. Bernadette was then reinterred, only to be exhumed one final time in 1925 for translation to her new resting place. The discoloration of her face was noted as well as the thinning of her nose. Since she was to be placed in a glass coffin in a chapel (now known as the Chapel of St. Bernadette), casts were made of her face and hands, which were covered with wax. Dr. Comte was once again present. This time he wanted to remove her heart but was opposed by the Mother Superior. He however removed two right ribs. After 46 years, Dr. Comte reported that when he cut into the body, it was soft and almost normal in consistency.

My friend John said that her serene face, even under its layer of wax, was a miracle to behold. Her added-on wax face mask and hands were designed by Pierre Imans, covering the blackish tinge no the face and the sunken eyes and nose.

It dawned upon me when concluding this story, that St. Bernadette's incorruptible body was not just the only miracle. Her life, that was full of sufferings plagued by a string of continuous illnesses, was. In Lourdes, I prayed for inner peace but somehow, I now see that being able to wake up everyday to life is indeed the biggest the miracle of them all! Life is short, make it sweet. 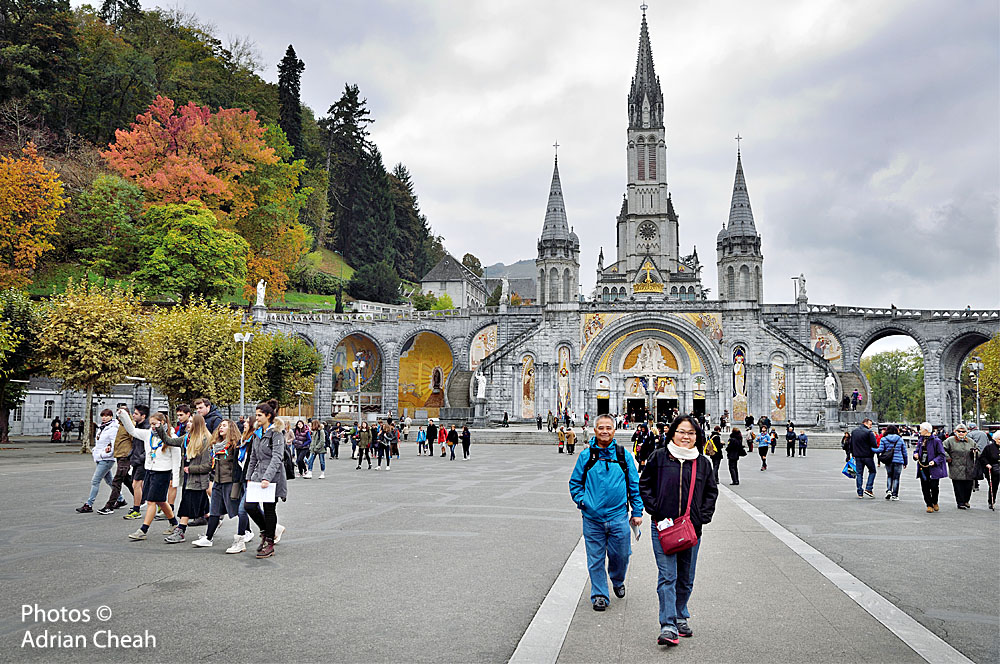 PS: Many thanks Mak and Michelle for Lourdes.