The golden Shwedagon Pagoda, a tale of eight sacred hairs 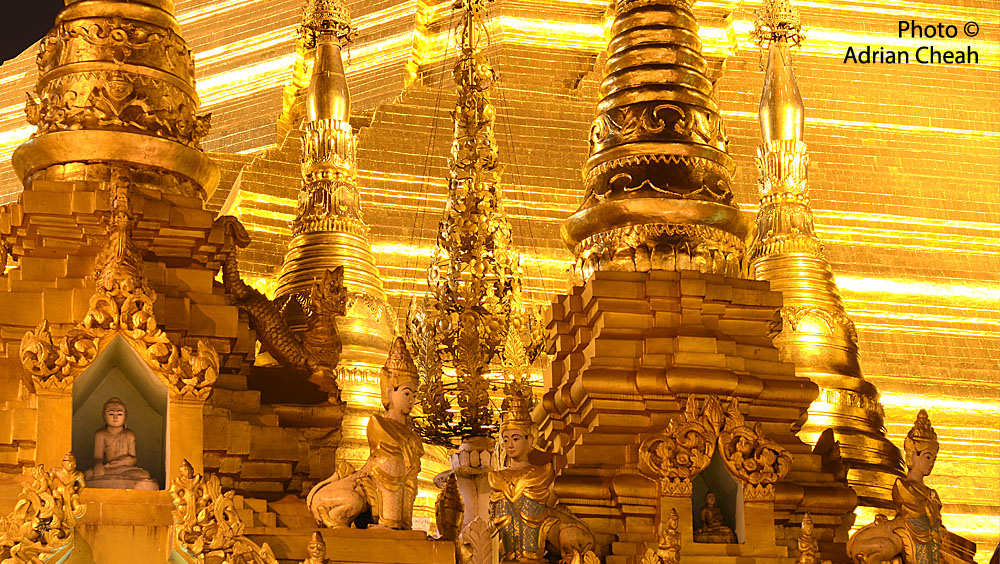 A warm welcome to you. Come closer and take a seat. Are you comfortable? Good. Let me tell you a tale of two brothers. They came with an offering, a humble gift of petite cakes made of honey. The young man seated beneath the ancient tree accepted the sweet offerings with a gentle smile and in return, he plucked eight hairs from his head and offered them to the brothers. The latter felt that this silent exchange signified something momentous.

The two brothers were merchants from Okkala in Burma. Bearing the precious hairs, they began their journey home, eager to present them to their king, Okkalapa. You see, they had been sent on a quest to search for a new Buddha who was about to reach nirvana. Their king had a vivid dream of this miraculous encounter and selected the two brothers to embark on this far-reaching voyage. Their pursuit led them to the land of Bhāratavarṣa (India) where a chance encounter took place. Imagine how ecstatic the brothers must have felt when they met the newly enlightened Buddha who had graciously rewarded them with these sacred relics.

Their journey back home, however, was filled with tremendous challenges and hardships. Two of the hairs were stolen by an envious king, two more taken by the ferocious serpent king who rose from his sea-bed kingdom to capsize their boat.

They persevered and eventually managed to reach back home. Upon their arrival, they were welcomed with a grand celebration attended by all the gods and nats in the land. The jubilant king greeted them and opened the box where the sacred mementos were kept, all eight hairs were miraculously intact. As the king gazed upon them, the hairs started to emit a radiant light that shone throughout the kingdom, causing a cascade of miracles – the deaf could hear and the blind could see. Rainbows appeared in the sky; flowers and gemstones rained down onto earth. In a euphoric state, the king ordered that the nested pagodas of iron, marble, lead, copper, tin and silver be built over, this time all to be covered with solid gold. Thus, this was how the mighty Shwedagon, the most sacred pagoda in Burma, came into being. 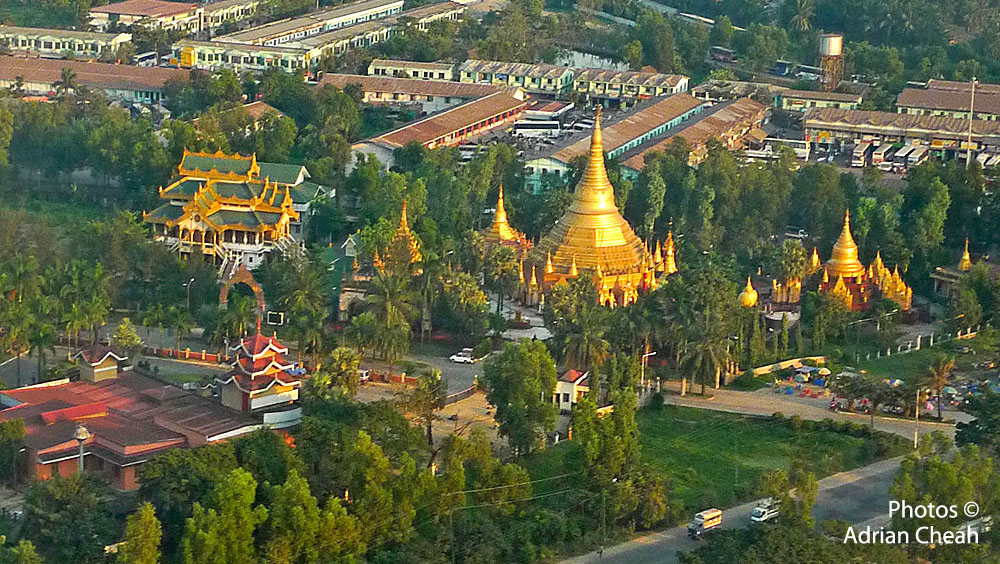 I deduce this version of the legend from Alistair Shearer's book "The Spirit of Asia – Journeys to the Sacred Places of the East." Shearer is a writer and cultural historian. Other versions of the legend are available but I like his best. With this story in mind, I explored Shwedagon Pagoda in November 2011 with excitement and awe. 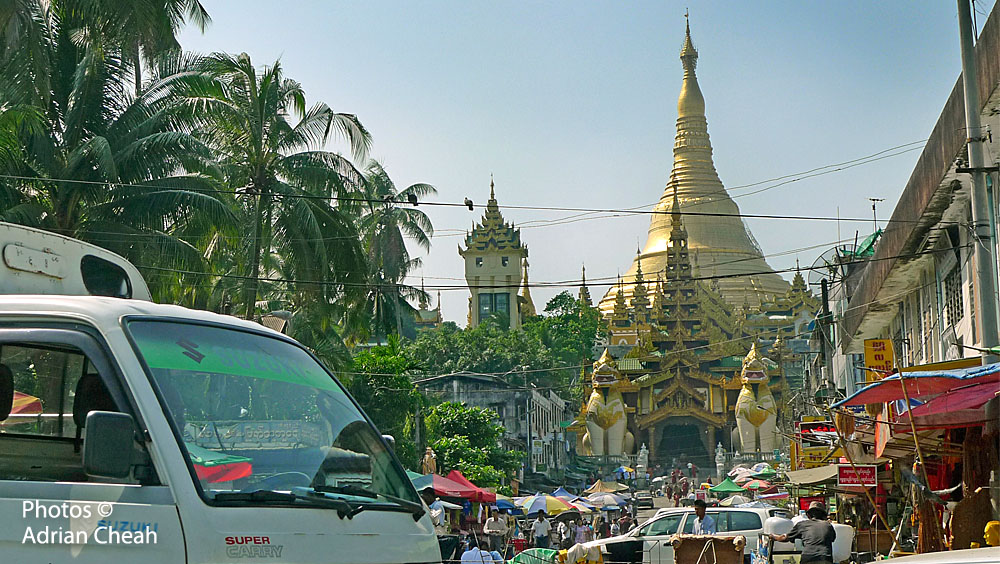 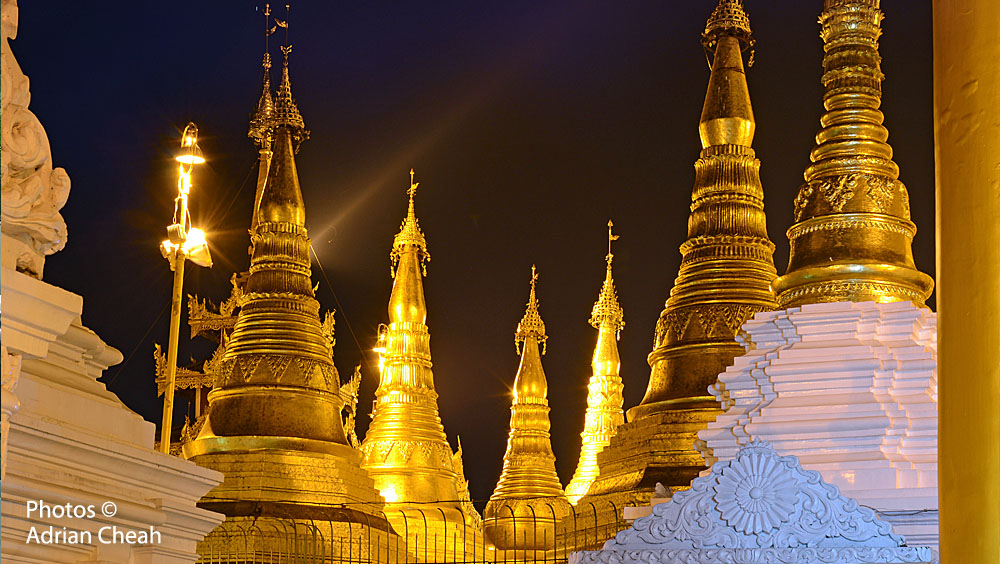 The legend adds an intriguing tale to the 112-metre high Shwedagon Pagoda in Yangon, towering over the city and glittering in all its golden splendour. According to estimates, the temple is covered with at least 90 tons of gold. As night falls, the glittering monolith radiates its brilliance and is visible like a beacon to most parts of the surrounding city. It is truly a wonder to behold!

Sidebar: In 1989, the name "Burma" was changed to "Myanmar" and "Rangoon" to "Yangon". Burma refers to the majority ethnic group in the country. Myanmar – meaning “fast and strong people”– is considered to be a literary form of the same name, while Burma is the colloquial form of “bamar”, pronounced as “bama” and “myamah” as well. 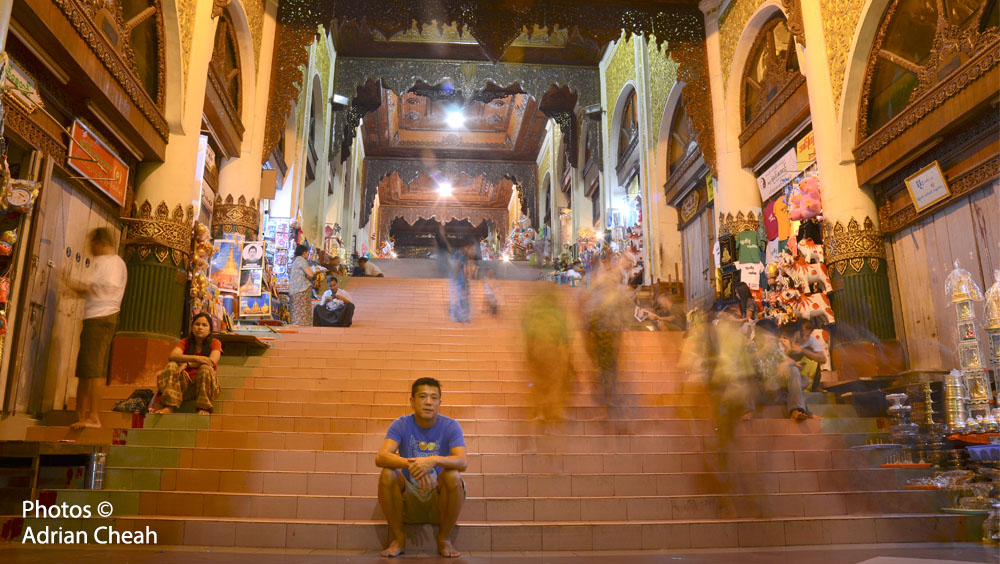 Shwedagon Pagoda, also known as the Golden Pagoda, is the most important Buddhist pilgrimage site in Myanmar. From the entrance, you are greeted with a long covered entryway lined with wayside booths offering pilgrim goods and votive offerings for sale. Having purchased the necessary prayer offerings needed, devotees enter the temple complex and begin their journey of devotion. A large number of Buddhist believers from near and far, travel to Shwedagon Pagoda to pay homage and make offerings to the benevolent Buddha. They prostrate and kneel in front of the stupas, deep in silent invocation hoping that their fervent intercessions will grant them wisdom to live a fulfilled life. The peaceful, quiet and serene atmosphere around the vast temple complex is conducive to someone wishing for a personal connection to look within, to just sit and find tranquillity. 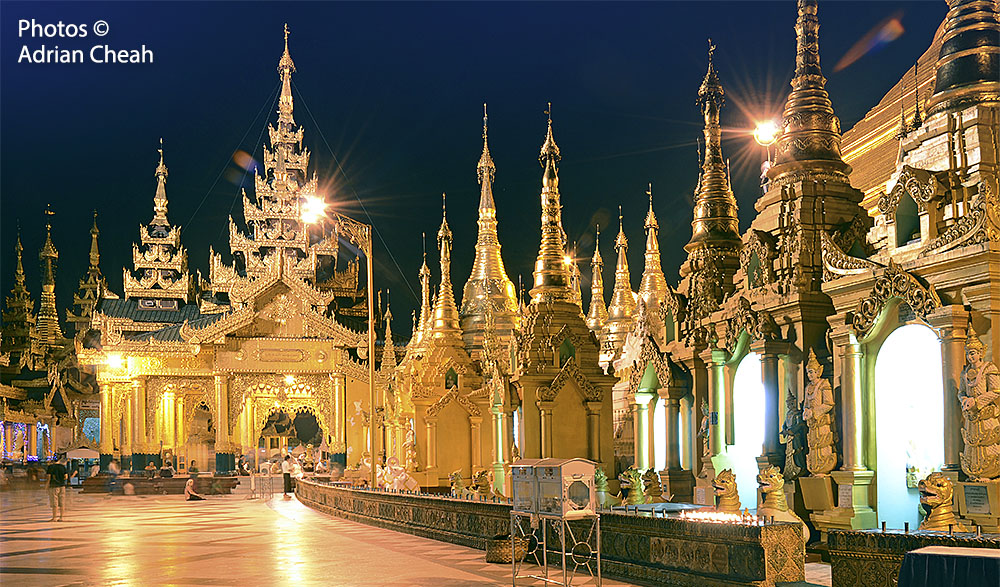 The epicentre of the temple complex is Shwedagon, a huge octagonal base of nearly 1,500 feet in circumference. The main stupa is believed to enshrine sacred relics of Gautama Buddha as well as the three previous Buddhas.

Through the centuries, kings of the kingdom continued to patronise Shwedagon Pagoda, most notably, King Hsinbyushin (1763-1776), who was responsible for increasing the height of the pagoda to 99 metres and the shape it is today. He donated gold to gild the exterior as well as sponsored the construction of jewel-encrusted hti (umbrella finial) to crown the pagoda. A new crown hti was donated by King Mindon Min in 1871, increasing the height further to its current 112 metres. According to the official website of Shwedagon Pagoda, the hti was set with 5,448 diamonds, 2,317 rubies, sapphires and other gems as well as 1,065 golden bells and at the very top, a single dazzling 76-carat diamond. The bells are used to attract the attention of gods from the realm of Tāvatiṃsa and other abodes of the devas of Mount Meru. 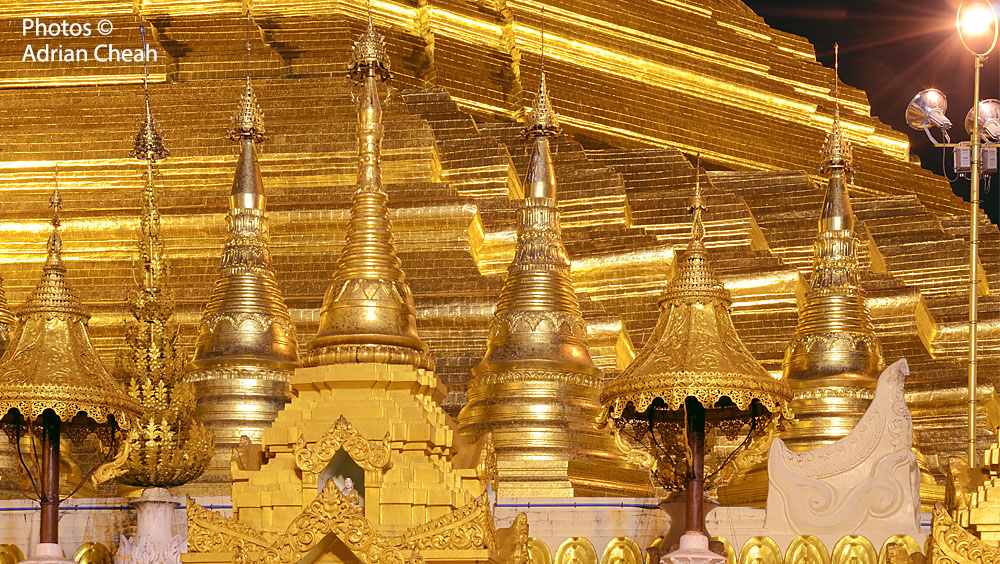 Numerous pavilions are filled with marble Buddha statues throughout the temple complex. All are guarded by enormous chinthes, Burmese mythical leogryphs (lion-like creatures) with white bodies and golden manes. At each corner of the octagonal pagoda is a shrine with eight statues facing eight directions, symbolising seven days of the week (with Wednesday, midweek day, having two). Every shrine is assigned to a planet and an Eastern astrological animal sign associated with it. Devotees pray at the shrine associated with their day of birth, offering candles and flowers as well as bathe the statue of the Buddha. With pure intentions, they look forward to receiving boundless blessings and virtues while reflecting on inner purification.

Legend has it that when Prince Siddhartha was born, the sun shone brilliantly, flowers bloomed and birds sang. Nine mythical dragons appeared in the sky above him and emitted the purest water to cleanse the newly-born prince. He then took seven steps, at each of which, a lotus flower sprang from beneath his feet. Pointing one hand towards the sky and the other towards the ground, he said, "Heaven above and earth beneath, I am the honoured one, the one who liberates all who suffer in the three realms". Since then, the bathing ritual has been kept alive till today.

Stories and legends have journeyed through generations surviving thousands of years. Stories such as the Epic of Gilgamesh about the king of Uruk, dating from the third Dynasty of Ur (c. 2100 BCE) can be enjoyed even until today, thanks to enduring oral traditions as well as the surviving Deluge clay tablets. In Malaysia, tales from Ramayana and Mahābhārata once came alive on wayang kulit (shadow puppet) screens. Sadly, captivating story-telling by local penglipur lara (storytellers) is a thing of the past. In March 2015, Penang Irish Association flew in Eddie Lenihan, a seanchaí (traditional Gaelic storyteller) from Ireland as it celebrated St. Patrick's Day with the theme, "Myths, Legend & Folklore". Enchanting Celtic tales entwined with magic, curses and charms were orated live in Penang. With an audience, the atmosphere where such drama was brought to life, was highly engaging – drastically different if you were to see it on your handphone.

As all things eventually evolve with time, so must storytelling. In 2020, I was enthralled by an audiobook written and narrated by Stephen Fry entitled Heroes. Fry brilliantly retells dramatic, funny, tragic and timeless Greek classics. It is pure magic! I sincerely hope local writers will emulate Fry and bring Malaysian legends and myths to the new generation, these legends reachable 24/7 and just a swipe away. Like the story of the two brothers, let us hope that something magical happens to keep all these legends alive and well.

From Yangon, my travelling buddy, Ben Huat and I boarded a flight heading for Bagan (formerly Pagan), once over 10,000 religious monuments stood tall in its plains. That is another story you should read as well.