Fatherhood has to be one of the most adventurous journeys that I could ever imagine embarking on. There is no manual or compass to guide you and everyday unfolds a new chapter. My daughter Jean was six when I decided to take her up Mount Kinabalu.

Months before the trip, I knew that it was important to train a little for the hike as it would not be a walk in the park. On weekends, my family and I would climb the steps up to 47 at the Penang Botanic Gardens. Jean was not a happy hiker at all and would grumble the entire way. So much drama could spill out of this tiny little girl. It was almost sadistic enjoying this, although I had to bottle it all up within, trying very hard not to burst out laughing and putting on a straight face, assuring her that we were almost there. This was just a short hike and now multiply the grumbling a hundred fold for Mount Kinabalu. Jean was whining all the way up the mountain to Laban Rata. She showed anger, disgust, pulled long faces, pretended that her little legs were going to fall off any second, expressed bewilderment and a hundred other emotions. This time, it was no longer funny but rather annoying yet worrisome at times, wondering if I had pushed her a little too far. I am not a health fanatic and being over 40, my body was beginning to reveal its age.

"Just one little step at a time, that's all it takes. We will rest just around the corner", I bargained with her. And we did. It was a blessing in disguise that I had Jean with me. We went up the mountain slowly, without haste and armed with my camera, I was able to capture some lovely photographs of the journey.

It was spring and the flowers were in full bloom. I was also able to enjoy the rich, diverse flora and fauna that were alive on the mountain at different altitudes. It is estimated that Mount Kinabalu, including the pristine forests in Kinabalu Park, has a staggering 5,000 to 6,000 plant species, over 300 species of birds and more than 100 mammalian species identified. In December 2000, the 754 square kilometre Kinabalu Park became Malaysia's first World Heritage Site designated by UNESCO for its role as one of the world's most important biological entities.

Jean started the hike full of laughter and enthusiasm as she had two hiking buddies (sons of my friend, one was her age). Our group of 10 covered a six-kilometre ascent starting at 1,866 metres above sea level and finishing at 3,270 metres above sea level (scaling a total of 1,404 metres in elevation) on our first day. At a steady pace, you could reach Laban Rata within three to four hours.

The transformative Jekyll and Hyde persona of Jean, from bubbly little princess to grumbling little diva, should have easily won her an Oscar. To illustrate my point, sometimes Jean would rest quietly on a rock, slowly but surely reclined until she was flat out, lying motionless as if all the energy was drained out of her. Clapping internally over such a brilliant performance, I would gently pick her up, bribe her with Sugus and eventually, we carried on. Jean and I took almost nine hours to reach Laban Rata. I am very proud that Jean made it all the way up with her two little feet, enlisting all her effort and will power (as I refused to carry her). Even at that tender age, Jean knew that she had to rely on her strengths to reach Laban Rata, learning to be independent and self-reliant. On the other hand I caught a glimpse of what "patience is a virtue" actually meant.

The following year, she was in Standard One. Her classmates found it hard to believe that she scaled the mighty Mount Kinabalu. Their jaws further dropped when they learnt that she has no television at home! Even her teachers thought she was pulling their legs. Minus a television set at home, Jean devoted her time to reading, to ballet and piano classes as well as running around with me attending plays, events and functions. On the last Sunday of the month over time, Jean was with me at the Little Penang Street Market where she learnt to make her own lantern, paint batik, print traditional woodcut images and work on a host of other local crafts. She was also featured in The Star for her Merdeka-inspired rainbow-loom bracelets. I have tried my best to place her within different environments, to experience various encounters and be ready when opportunity comes a-knocking.

Upon reaching Laban Rata, the above photo says it all. Slump on the canteen table, Jean overwhelmed with exhaustion, fell into a deep sleep; no earthquake could have awakened her.

We retired early that evening and awoke at 2:00 am to get ready for the final climb to the peak. It was freezing that brutally chilling morning! We bundled ourselves the best we could to keep warm. At about 3:00 am armed with headlamps, we started the climb in the dark, going over some steep sections with wooden stairs in the sub-alpine forest. Only about tracking 100 metres from where we started, Jean vomited and out came her breakfast. I gave her some water and she threw up again. A soft whimpering voice whispered that she did not want to continue. Looking into her pale ashen face, I wrapped my arms around her to warm her up a little. She felt dizzy and was shivering. Our experienced guide advised us that she should conquer the summit another day, when able and healthy. He took her down, back to the lodge where my friend's wife took care of her. Since she was in good hands, my wife and I continued the arduous challenge to reach the highest point in Southeast Asia.

From Laban Rata, the very steep climb to the summit has an increase in elevation of 800 metres! Along the route, there are guide ropes to help you to navigate the smooth granite rock surfaces, some extremely steep. Due to its high altitude, I realised that breathing required more effort. Looking down at my thermometer, I saw the reading showed 0º Celsius. Coupled with strong winds, the 2.7-kilometre ascend took great determination and perseverance. 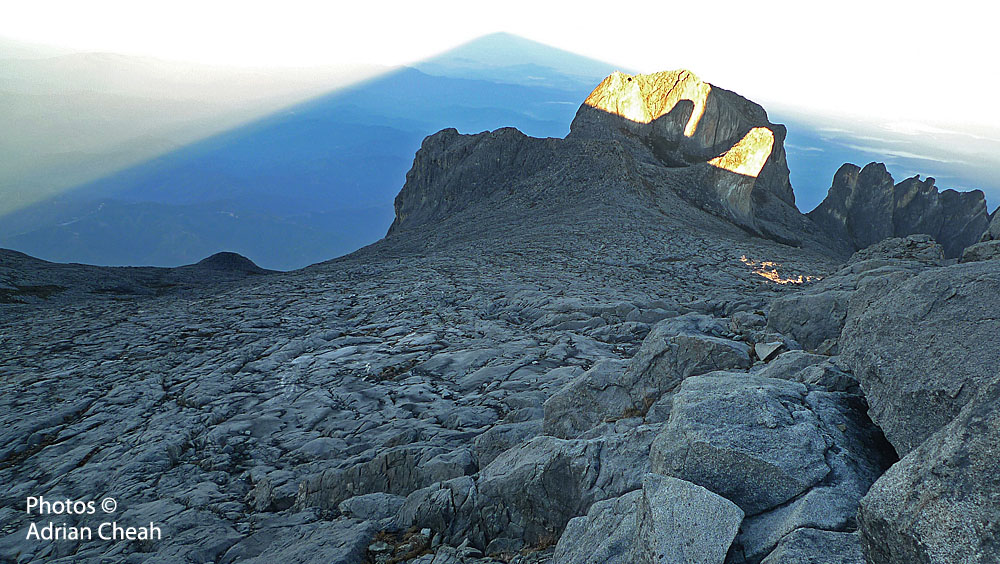 In our group, my wife was the first to reach the summit. The rest soon arrived and as we huddled up, we awaited the sight of a glorious sun to rise. A victorious achievement washed over our happy yet fatigued faces as we witnessed the dawn of a new day, a significant day indeed for us at the summit of Low's Peak, 4,095.2 metres (13,435 feet) above sea level.

The summit was named after Hugh Low, the British colonial administrator who made the first recorded ascent of Mount Kinabalu in March 1851. He was led by Lemaing, a local Dusun guide from Kampung Kiau. Low however did not scale the mountain's highest peak. In 1888, John Whitehead, a zoologist, did so. 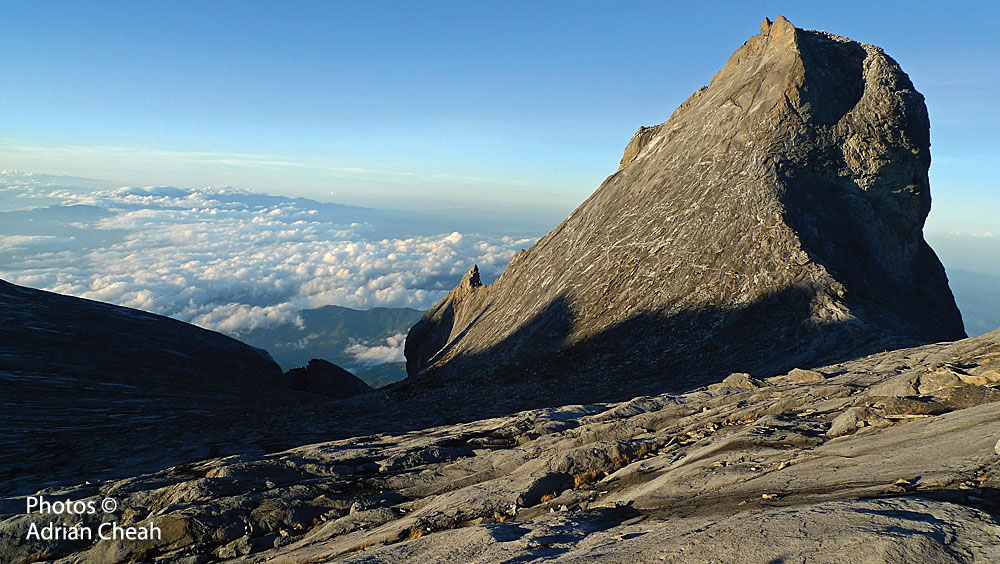 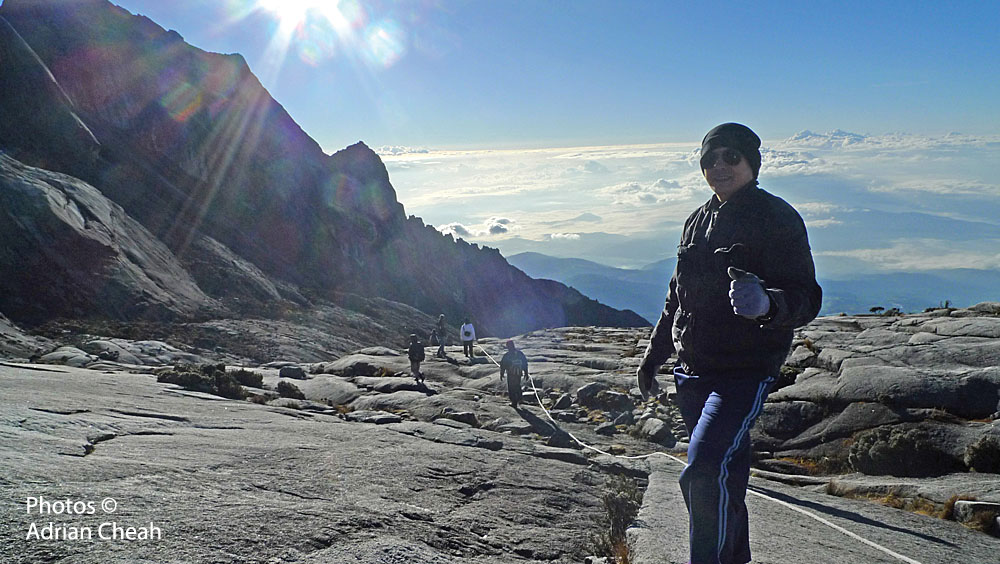 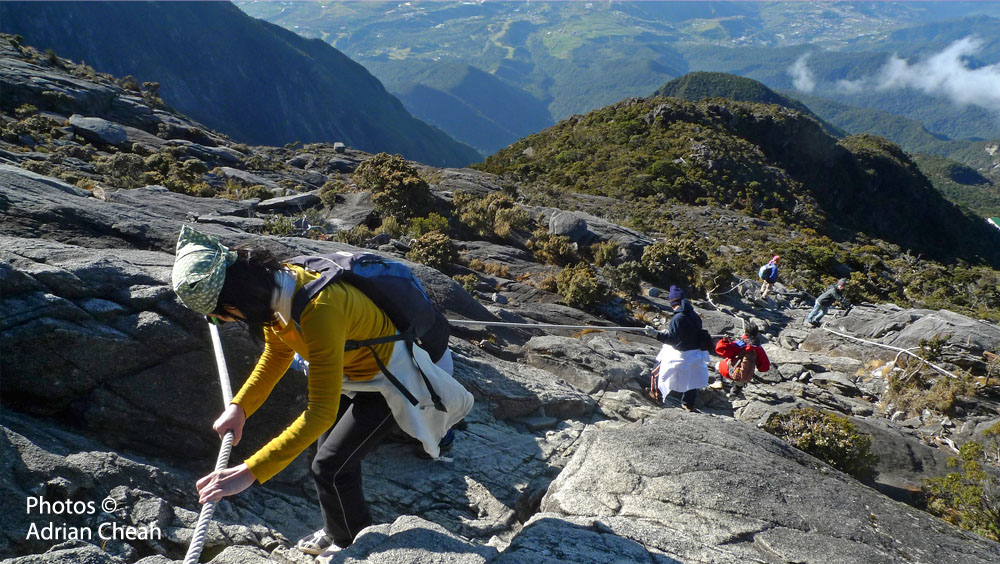 Like Low and Whitehead, besides being filled with awe and a sense of achievement, I also found myself on the flip-side of a coin, a fallible human being whose strengths and everything that I defined myself with, pale in comparison to the majesty of the mountain. In consolation, this adventure has inscribed in my heart an awareness that to scale anything momentous in life, to reach the top, only a single step at a time would be needed. I sincerely hope that Jean would also take away with her this important lesson as she journeys through life.

PS: Many thanks Weng Hong for organising this memorable adventure.