Sri Mariamman, the temple of an ancient goddess

Penang has a large community of Indians, broadly divided into those from the North (Bengalis, Sindhis, Gujerati etc.) and the South (Tamils). It is not surprising then that the Penang landscape is dotted with Hindu temples, from the large and ornate to the unostentatious makeshift huts and lean-to's.

One of the more opulent temples in Penang is the Sri Mariamman at Queen Street. It also happens to be one of the oldest. Built in 1883, the temple is named after the goddess Mariamman – also called Mari, Mariamma, Maryamman or Marika – who has devotees all over South India.

Historians claim that the worship of Mariamman started as a tribal religion of the Dravidians (an ancient dark-skinned people of southern India) predating the arrival of the Aryans and Brahmanism. There are some who believe that the name Mariamman comes from Mari which means power, and Amman which signifies mother, so she could be regarded as a mother-power figure.

Sri Mariamman Temple is dominated by its towering 23.5ft-tall gopuram (entrance gate). It is a lofty four-tiered tower with brightly coloured sculptures of soldiers, Hindu gods and goddesses and floral decorations, plus four swans. It is topped with five small kalasams. The tower represents Mt. Meru, the celestial mountain that holds up the heavens, and the realm of the gods which begins in the temple compound.

As the name would imply, the Sri Mariamman temple in Penang is devoted to her and features the goddess in various incarnations. During the Navarathri festival (a nine-night celebration when devotees worship female deities like Durga, Lakshmi, Saraswathi and Mariamman), the statue of the latter is taken out in a decorated wooden chariot. The procession winds through Little Madras, where some of her most loyal devotees are found. 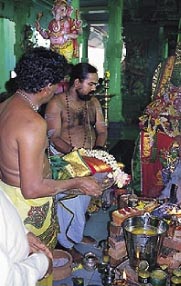 This picture on the right was taken on 3 November 1998 at the temple capturing an unusual ceremony. According to a source, the temple had then undergone renovation and the ceremony was to welcome back into the temple its deity as well as to pray for strength to ward off evil spirits.

A flaming fire, enhanced by the pouring of ghee, sprung high in the front portal of the temple. Offerings that were made both by the devotees and priests included a sari soaked in ghee and split coconuts topped with malai (flower garlands) which were thrown and burnt in the fire.

Hundereds of devotees throng the temple on Navarathiri, Chithra Pournami, Deepavali and Thaipusam eager to offer their prayers on these holy days.

In the year 2008, the temple held a big celebration commemorating its 175th anniversary.

One could casually observe that the plethora of temples, mosques and churches in the country are mute symbols of Malaysia's 'multiculturalness.' But on a deeper and more significant level, they serve to quench man's yearning for religious and spiritual fulfilment and his search for the answers to the meaning of life.

Visitation to this temple is limited to morning and evening. Temple opens starts from morning 6:00 am till 12:00 noon and evening from 5:00 pm till 9:00 pm. The temples closes after the prayers are performed at 12 noon and 9:00 pm respectively. Daily there will be Pujas (prayers), mornings 7:30 am and evening 6:30 pm. Prayers are usually conducted by the temple priests in these times and visitors may observe these prayer sessions taking place. If you wish to enter the Sri Mahamariamman temple, it would be polite to ask permission from any of the priests and please remember to remove your shoes before entering the temple grounds.