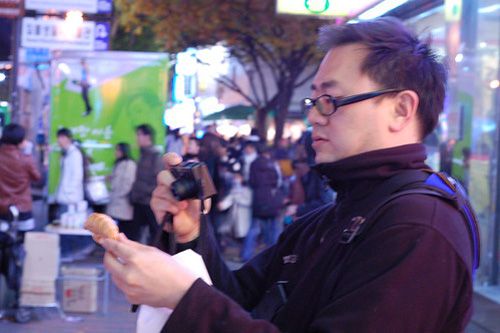 I have got to know a lot of people during the last years, someone I will never forget is Emil Goh. When I arrived to my 3 months long residency at the Samsung Art and Design Institute in Seoul back in 2007, I happened to get to know a Malaysian designer living in a voluntary exile at the city that never sleeps. Since 2004, when he arrived to Korea for a residency at SSamzie Space, he felt in love with the big city and stayed there.

Emil’s endless curiosity brought him to one of the open laboratory sessions I was running at my lab in SADI. People would come to learn about open source hardware prototyping. He understood I was in the serious need for a guided tour to Seoul. I exchanged basic lectures in electronics for crazy dinners at non-touristic places. Personally I doubt he remembered anything of what I explained, but I will never forget every minute we spent wandering around the different neighborhoods. What he would never forget was a face or a name. He had an endless collection of friends coming from all over and he would devote all his time and attentions to the newcomers trying to make the best out of their time in Korea.

Soon we discovered we had common friends back in Europe. Educated as designer (or artist, or both) at Goldsmiths in London, he would develop his profession as educator at different universities. In Korea he worked for Hongik, in Singapore for Nanyang … as artist he was probably showing at every gallery in town … he also had some hits as designer like his lamp for hanging clothes in small rooms. Knew everybody and worked for everyone. 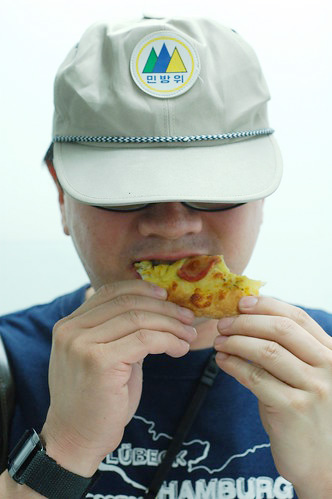 He was collecting pictures of the city. According to his latest report he had over 49.000 in his hard-drive. Could spend days riding his GPS-enhanced bike while taking shots of buildings, people, or just different types of kimchi. I swear I saw him photographing every single dish we ordered at restaurants. Collected all sorts of mobile phones just for the pleasure of understanding how they work. He even got an iPhone when it was not possible to use it in Korea just to play around with the UI. 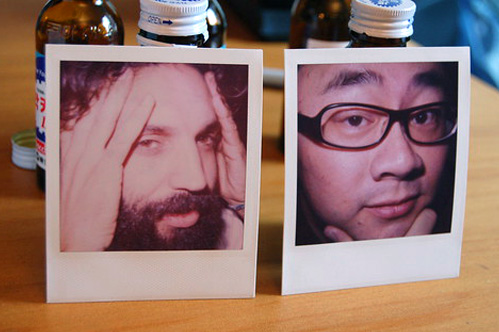 Today I got the sad news from a friend in Seoul. Emil left us on September 7th. I was planning my next trip to visit him, in his last email from July he claimed for his right to get to know my 19 months old daughter, Bobbie. Unfortunately it will never happen, now. Go Go Emil Goh, wait for us wherever you go.

you describe him so well. he inspired me so much. i always enjoyed his visits to hk – and was looking forward to seeing him again in hk or seoul. what a loss. i hope he knows just how much he was loved.

Many people in and out of S.Korea feel the same way. For Seoul based artists, Emil was part of the city and the art scene. Pretty much everyone knew him and appreciated his presence and positive energy. Rest in peace, Emil Goh.

Hey David,
I heard the sad news from a mutual friend of his. I still can’t believe it. Emil will be greatly missed.
Younghui

Thank you for your memories.
I first met Emil at college in Sydney where we spent much time enjoying gastronimic delights which he was forever uncovering. He always had a positive take on things. Could make you feel everything had a place in the world no matter how mundane. He visited me in Scotland where we went to a castle for dinner and he got ticked off for not wearing the appropriate attire! All of which made us chuckle even more.
He is sorely missed.
Rest in peace Emil.
With love, Susie

Emil, thanks for your positivity and boundless energy. We worked together on a project in Brisbane – we will miss you greatly.

hi,
the Asia Art Archive (www.aaa.org.hk) is going to pay a tribute to Emil in our October online newsletter. the (first) photo of emil posted here is so Emil. May i download it for the purpose? Full acknowledgement will be given. thanks in advance.

I met Emil in the mid 80s when he joined my drama class at newcastle university in nsw. He was such a generous spirit, connecting people up in ways that changed the whole dynamic. After he graduated we became friends, and collaborated on a crazy presentation for Artist’s WEek at the Adelaide festival – he made a photo essay and I did an accompanying narrative. the highlight was some weird story about a potato – he took the most wonderful charismatic shot of a potato, fresh from the earth. Every time I met him it was somewhere different – Sydney CBD, the Adelaide Festival, Russell Square in London – and he always had some compulsory adventure on the agenda. An absolutely rare vitality, from which his artistic work was born.
WE were just luck to have known him. jg

On behalf of Madam Sylvia Lee Goh (Emil Goh’s mother), there will be an anniversary memorial service for Emil Goh in Singapore, details as follows:
FIRST ANNIVERSARY MEMORIAL SERVICE for Emil Goh
Address: Church of St Mary of The Angels, 5 Bukit Batok East Avenue 2, Singapore 659918
Date: September 4, 2010 (Saturday)
Time: 3pm
Should you have any enquiries and to confirm your attendance, please contact This email address is being protected from spambots. You need JavaScript enabled to view it.