The Hungry Ghost Festival, locally known as Phor Thor, is an annual month-long celebration observed by the Chinese communities not only in Penang but also throughout Malaysia, Singapore and Phuket.

According to Chinese folk, it is believed that on the first day of the seventh moon of the lunar calendar, the gates of hell are flung wide open to set free its captives, allowing them to return to earth and roam freely, some even venturing to visit their living descendants.

Since Penang is known as one of the best food heavens in the world, it is a fair bet that this is where the majority of the starving spectres would want to go. Thus, in Penang, this Taoist festival of the afterlife is celebrated on a grand scale. It ritualises a link between the living and the dead, earth and hell as well as body and the spirit.

Spirits which were not given proper burials, those which were banished to the underworld and those whose living descendants had "failed" to pay proper tribute to are once again able to return to the realm of the living. They come, hungry for comfort and food, and for some, revenge or even to "tidy up" unfinished business. Either way, for believers, it probably pays to be respectful to the spirits during the month-long tenure and it is probably wise to stay in their good books.

Prayers, incense, food and the burning of "hell bank" notes as well as paper effigies of worldly possessions, such as houses, cars, televisions and even the latest hand phones are often offered to appease the spirits, centred around the 1st and the 15th of that month. It would be ironic if one were to also include Richard Dawkinds’ The God Delusion in the bonfire. This would indeed be an interesting read on the other side. For some, a grand feast will be prepared especially for departed ancestors who would have a "return home” visit.

These rituals are believed to help the departed pass through the 18 courts of hell, where their souls face judgment and punishments before they can be reborn again.

Armed with the conviction that appeasing the spirits will bring them good fortune, private enterprises and businessmen frequently join in the festivities, supporting the staging of Chinese street operas and puppet theatres which can be seen throughout George Town. These performances are not just for the entertainment of the spirits but for the public as well. So join in the festivities and catch a story or two of the live entertainment. With distinct often garish make-up and donning elaborate sequined costumes, the Chinese opera performers entertain their spectators in front of hand-painted backdrops, raised above the ground on makeshift stages. Here, remember to leave the first row empty as it is to accommodate the spirits.

The month of the Hungry Ghost Festival is, generally speaking, a bad time to do anything. Having a wedding or relocating to a new home are considered taboo actions and heaven forbids that one should die during this month too! Staunch Chinese believers avoid travelling or performing any significant ceremonies throughout the festival. Businessmen avoid going on board air planes, buying property or closing business deals during the Hungry Ghost Festival. This might all sound quite extreme but for those who are shackled by the constraining belief would find it a good time to consolidate their plans and take things easy.

Children and toddlers are cautioned from venturing out of the comforts of their homes in the evenings to avoid being lured by the spirits to the kingdom of the dead. Swimming is also a scary prospect – children are often reminded that the hungry ghosts may pull them under, so they will have a soul to take their place in hell! With the advent of technology and the information age, some today's children find such tall tales difficult to swallow. 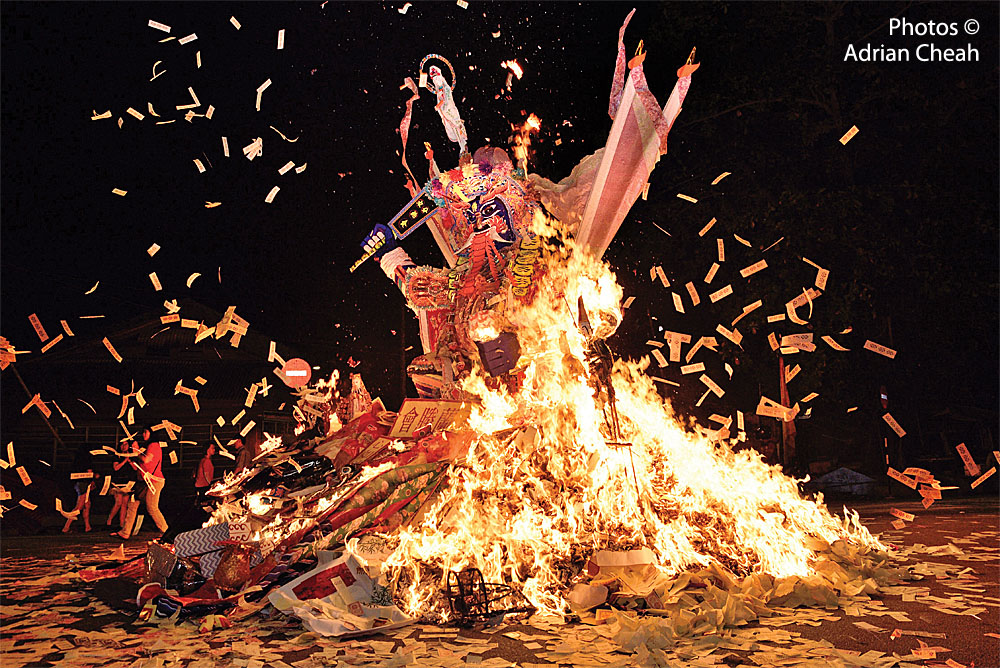 Have you noticed a small image of the Goddess of Mercy on top of the elaborate head-dress of the King of Hell? It is believed that the King of Hell is actually the transformation of Guan Yin, a combination of benevolence and fierceness. Guan Yin takes on this fearsome form to gain control over the restless spirits during the seventh month.

The 30th day of the seventh moon is the last day of the festival. At the stroke of midnight, the ghosts return to Hades and the gates are shut after them. Paper deities, more “hell bank” notes and other faux paper ingots are burnt in a giant bonfire as a final send-off. With a sense of relief and ease, many communities, in particular the Taoists, will resume their daily way of life, filled with the confidence that they have fulfilled their duties towards their dead ancestors.