A gift of money, simply practical and convenient, is positively appreciated by all. It is common for the Chinese community throughout the world to present ang pows (red envelopes of money) as gifts during auspicious occasions such as during Chinese New Year, birthdays and weddings. Although this humble offering dates back thousands of years, it is still prevalent to this very day. 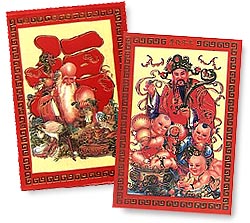 The gift of money cuts across culture and borders. In western culture, money is often inserted into a birthday card or given in the form of cash vouchers without much ado about the way it is presented. However, to the Chinese community, a gift of money must be an auspicious offering – always insert it in an ang pow decorated with lucky symbols, Chinese characters of abundance or deities representing fortune and longevity. The vibrant red colour not only symbolises auspiciousness and prosperity, it is also believed to have the "power" to ward off evil spirits.

Do not ever put the gift of money for a festive or auspicious occasion to a Chinese person in a white envelope! You would face the wrath and fury of the recipient as this is only done during funerals. Also known as "pek kim", it is customarily given to aid the family of the deceased to fray the cost of the funeral.

The first gift of the ang pow

Although on one cannot truly pinpoint the story of when the first ang pow was given, there is a fascinating tale told a thousand times over. This story dates back to the Sung Dynasty (960–1279) in a village called Chang-Chieu in China. A huge ferocious dragon-like demon terrorised the villagers and no one was brave enough to slay it, not even the skilled warriors or statesmen of the land. It was the fearless zeal of a young orphan who changed the fate of the village when he took up the challenge. Armed with only a sacred sabre inherited from his ancestors, he fought the demon with valour and eventually reigned victorious. Overjoyed, the villagers jubilantly celebrated the historic victory and the elders presented the brave young lad an ang pow filled with money for his courageous deed. It is believed that since then, the ang pow has become an integral part of Chinese customs that has gained popularity through the passage of time.

How much to give?

Although the amount is determined by the generosity of the giver, it is a common practice to insert an auspicious-sounding figure. Take for instance, one could give a favourable amount ending with eight (e.g., 88 or 888), as the numeral eight connotes fortune in Chinese, or nine (e.g., 99 or 999), which sounds like longevity. Some would top up a round figure to illustrate abundance (e.g., 11 or 101). Whatever the amount is, an ang pow has always been something exciting to receive.

When are ang pows are given?

15 days of the Chinese New Year

During the Chinese New Year celebration (1st to the 15th day of the first lunar month), ang pows are given by married couples to kids, teenagers and unmarried adults (the lucky ones who will continue to receive them until they get hitched).

My sweet run of collecting ang pows came to a grinding halt in 1999, the day I got married. From then on, my days of giving began and will continue for as long as I live. I also made it a point to give ang pows to my parents when I started earning. Come Chinese New Year, my daughter gets very excited, hauling in lots of ang pows every year. I am happy for her and like me, she too is a part of this cycle of receiving and giving ang pows.

In Penang, when a new-born baby celebrates his/her "first moon", parents will distribute to well-wishers gift boxes each containing nasi kunyit (turmeric glutinous rice), curry chicken, two hard-boiled eggs dyed red and ang ku (red tortoise cakes). The shape of the ang ku announces the sex of the baby (tortoise shell-shaped ang ku for a baby girl and smooth round-shaped ang yee for a baby boy). Although in the good old days, these food items would be prepared at home, it is currently more convenient to order them from shops offering such packages. Some prefer to give a cake, a Kentucky Fried Chicken voucher or an Ayamas full moon gift pack. In return, it is a traditional Chinese custom to give back to the proud parents an ang pow.

The Chinese community also prefers to give ang pows during weddings and birthdays. The receiver then has the opportunity to decide how best to spend the money.

Some of the elderly will not only receive ang pows on their grand birthday dinners (e.g., 80th) but also distribute ang pows to the younger generation as well.

Some Chinese sinsehs (practitioners of traditional Chinese medicine) are usually given ang pows in lieu of cash payment for services rendered, like resetting dislocated joints and such. According to my late sister Sandra, they should not accept cash upfront for their services because if they do, unwanted ills and bad luck will befall them.

The same applies to some Chinese mediums when their "channelling" services are sought after. The situation may seem like a paradox but it somehow is not, considering that an ang pow (even though containing money) is given freely and not because of any contractual obligation.

For those who believe in feng shui would place an ang pow containing "gold coins" tied with a red thread in the northern sector of the house in order to usher in good luck. If you so happen to spot this in your friend's house, you would already know why.

In Malaysia, the gifting of ang pows has cut across cultural lines and is no longer observed only by the Chinese community. Some Malays have made it a norm of giving out green ang pow decorated with Islamic motifs during Syawal. Similarly, Indians have joined in the act of giving cash, tucking legal tender into colourful ang pows for kids during Deepavali.

Ang pow envelopes are easily obtained for free from banks, jewellers, hotels and certain shops during festive seasons. You can also purchased them online or at some stationery shops.

I believe that this Chinese custom of ang pow gifting, packaged and sealed with good tidings, will always be in vogue. As we move into a cashless society, virtual ang pows could soon be the new norm.